Tragedy and Hope: A History of the World in Our Time 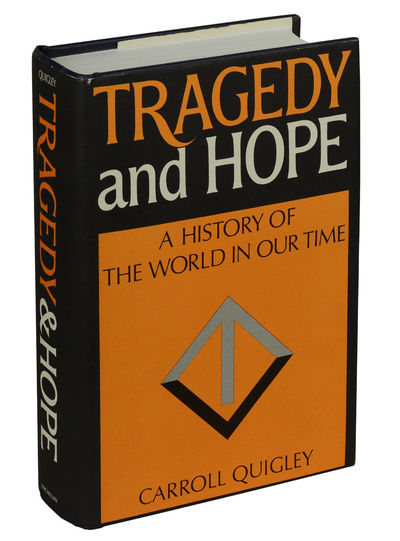 by Quigley, Carroll
New York: The Macmillan Company, 1966. First Edition. Hardcover. Like New. First edition. (All first printing points present: stated "First Printing" on copyright page, no mention of later publisher Angriff Press, full page count, does not state "First published in 1966 by" on title page.) 1348pp. Fine in Fine dust jacket, absolutely unfaded with very light shelf wear. Clean, bright pages. A superb copy, easily the best we've ever seen. Professor Carroll Quigley's magnum opus, a world history of power with a focus on the Anglo-American elite. In many ways Quigley was a complex bundle of contradictions: a conservative defender of Western civiliation who opposed the Vietnam War and was Bill Clinton's mentor at Georgetown. During the early cold war he was a true Washington insider who worked as a consultant for the Defense Department, the Navy, and other government entities, but his work is most often referenced by perennial outsiders like the John Birch Society and conspiracy researchers like the late Jim Marrs. (Inventory #: 170923001)
$2,000.00 add to cart Available from
Burnside Rare Books
Share this item
Burnside Rare Books
Offered by

The Way of Zen

New York : Pantheon Books , 1957
(click for more details about The Way of Zen)

New York : Pantheon Books , 1958
(click for more details about Nature, Man and Woman)
View all from this seller>