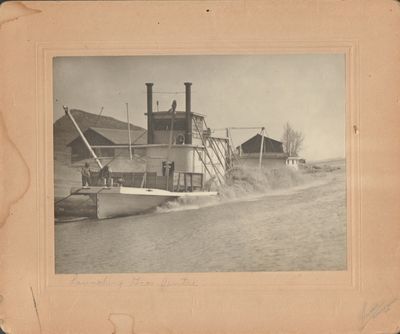 by Holmboe, [Frithjof]
Bismarck-Mandan, N. D.: Holmboe. Very Good. Photograph. B&W photograph on tan mount taken between 1909-1921, and in very good condition. Photograph measures 6 ½" x 8 ¾" without mount, 10" x 12" with mount. Image depicts the launching of the boat "Gros Ventre" on a waterway with two men in the rear of the boat. On verso of mount previous owner has written in ink "some more rubbish for Marion Piper from Julia Leach." Photograph has light silvering and very light wear to edges; mount has light soiling and moderate dampstaining, not affecting photo. Frithjof Holmboe, the photographer of this image, was a Norwegian immigrant who set up a photography shop in downtown Bismarck in 1909. He began making films in 1913 for the state Department of Immigration. He left North Dakota for California in 1921, which provides us with a timeframe for this photograph. The Gros Venture, a gasoline powered motor vessel, was built in Chamberlain, S. D. In 1903 and was owned by the Benton Packet Company out of Bismarck, N. D. Towns thrived and grew on river commerce and vessels such as this one would have been important to a community's success. After the advent of railways however, the river navigation business began to falter. The Benton Packet Company's last riverboat ran in 1926. (State Historical Society of North Dakota). . (Inventory #: 014370)
$325.00 add to cart Available from
Back of Beyond Books
Share this item

Boulder : Johnson Books , 1998
(click for more details about All My Rivers Are Gone - A Journey of Discovery through Glen Canyon)

Petroglyphs and Pictographs of Utah: Volume Two: the South, Central, West and Northwest

Salt Lake City, Utah : Utah Museum of Natural History , 1987
(click for more details about Petroglyphs and Pictographs of Utah: Volume Two: the South, Central, West and Northwest)
View all from this seller>