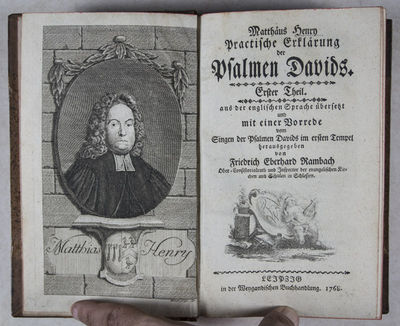 by Henry, Matthew; Friedrich Eberhard Rambach (ed.)
Leipzig: Weygand, 1770. First edition. Hardcover. vg- to vg+. Octavo. (1) 788, 703, 616pp. Original three quarter calf with gilt tooling, gilt lettering on black label of spine over speckled boards; raised bands. Frontispiece engraving. Vignette on title page. Beautifully historiated head and endpieces and initials. Translated from the author's exposition of the Old and New Testament into German with a lengthy preface by Rambach in each volume: on singing the Psalms of David in the First Temple in volume one, on the certain and reliable fulfillment of the major prophecies of the Old Testament in volume two, and a repudiation of a threefold prejudice against the Songs of David. The prejudices are described as follows: 1) according to the Bible David committed grave sins. e.g. sexual impropriety, which may disturb the heart of the believer even in the most devoted prayer, 2) the mention of the curses in the Psalms are interpreted in such a way, as if David prayed for them to God to destroy his enemies, e.g. revenge, and 3) some obscure the testimonials of Jesus in the Psalms even when they are obviously present. Each psalm is introduced with a summary and interpretations. At the time of this work Rambach was a German Protestant pastor at the Elisabeth Church in Breslau and inspector of the Lutheran Church in the principality of Breslau. He was a prolific writer and translator and is credited and recognized for introducing a number of important works of foreign literature to a German audience as well as for his own works in the area of Biblical theology. Text in German. Light rubbing and scuffing of boards with very light wear along edges of binding. Inked note and library stamp on inside front covers with library pocket and register on inside back cover and free endpaper in first and second volume. Library exlibris in third volume covering inked note on inside front cover. Library pocket and register removed with some paper remnants in volume three. Library stamp on verso of title pages with another stamp on page a 2 and at end of all volumes. Bindings in overall very good-, interior in very good+ condition. (Inventory #: 43120)
$500.00 add to cart or Buy Direct from
Eric Chaim Kline Bookseller
Share this item