By His Excellency Francis Bernard, Esq; Captain General in Chief in and over His Majesty's Province of the Massachusetts-Bay, in New-England, and Vice-Admiral of the same. A Proclamation for a general Fast 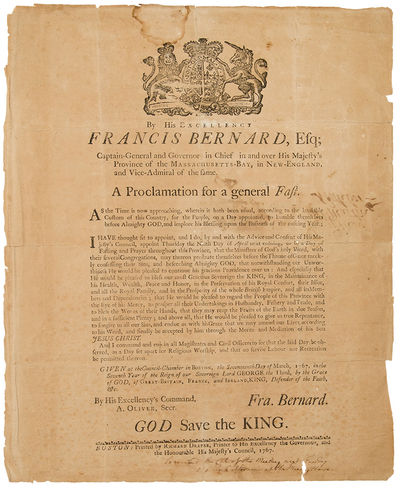 Appointing the 9th day of April 1767 as a fasting day of thanksgiving. '"A day of public fasting and prayer," it was traditionally observed in the New England states. It had its origin in days of prayer and repentance proclaimed in the early days of the American colonies by Royal Governors, often before the spring planting (cf. Rogation Days). It was observed by church attendance, fasting, and abstinence from secular activities. The earliest known fast day was proclaimed in Boston on September 8, 1670.' (Wikipedia)