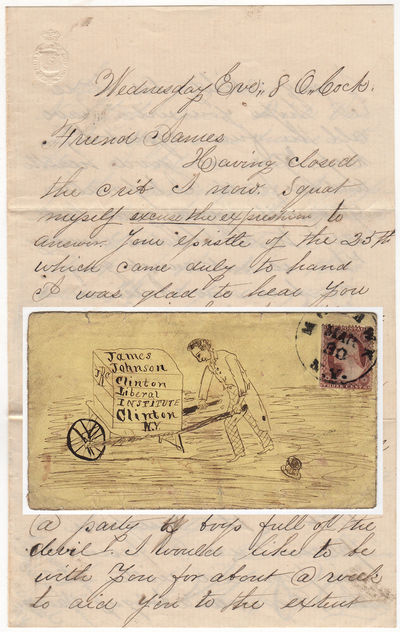 by John P. Cannod
Mohawk, New York, 1857. Unbound. Very good. This envelope features a hand-drawn pen illustration of a young man trudging along a road and pushing a wheel-barrow with a large crate addressed to "James Johnson, Clinton Liberal Institute, Clinton, N.Y." It is franked with a 3-cent, plum or deep claret, Type III or IV Washington stamp (Scott #26) that is tied to the cover with a circular Mohawk, N.Y. postmark. The envelope is lightly soiled.

The three-page, humorous letter to the Clinton student is from a friend in nearby Mohawk. It reads in part: "Having closed the crib I now squat myself excuse the expression to answer your epistle. . . . I was glad to hear you arrived at the Institution all sound. I hope that Society you have lately entered will flourish and keep its name in unblemished reputation. I hope you will raise the D- l as high as he can be raised by a party of boys full of the devil. I would like to be with you a week to aid you to the extent of my ability. . . . I hope also you will enjoy your last visit to the Ladies Seminary. . . . Last night I was out and had some fun raising hell and chuck full of Tod We have got a new lager Beer Saloon here down were Harvey Lyman used to keep market . . . and a person are provided with all the Lager and bologny sausage they may kneed at New York prices. . . . I suppose you know the Mohawk Dam Liberal Institute (no such academy existed) is about up the term this week. The boys are getting up an expedition when Rodney Mat & Juce [drawing of a shoe]maker will take active parts in sustaining the expectations of the Institute if has got any. . . . I will bring this thing to termination." The Clinton Liberal Institute was a coeducational preparatory school established by the Universalist Church in 1831 "not only for general purposes of science and literature, but with a particular view of furnishing with an education for young men designed for the ministry of reconciliation [since other academies were] "hostile to the doctrine of Universalism." (See Eddy's History of Universalism.)

The Institute was housed in four-story, gray stone building with a base 96 by 52 feet, and a separate, two-story women's building measured 40 by 25 feet. The Institute relocated to Fort Plain, New York, in 1878 and became a military academy in 1893. It was destroyed by fire in 1900. An interesting take on mid-19th century advanced education and an unusual usage of this stamp that hard to find used on cover. (Inventory #: 008916)
$500.00 add to cart or Buy Direct from
Read'Em Again Books and Paper
Share this item