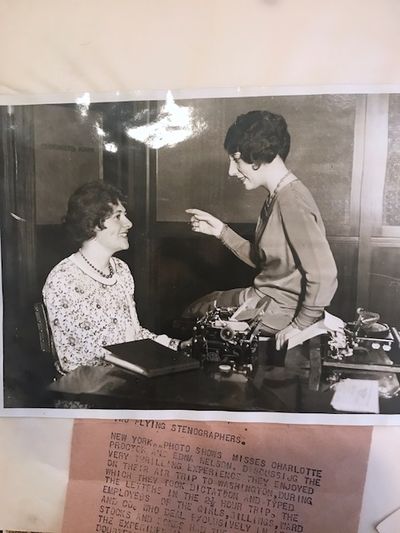 by Edna Nelson
New York: Edna Nelson , 1928. Hardcover. Very good. Ring bound hardcover scrapbook of Edna Nelson, stenographer for Wall Street firm Billings, Ward and Co. Four pages of typewritten notes affixed, Western Union telegram dated August 16, 1932 'Just came down to earth everything fine. Edna' Postcard from the Occidental Dining Room, Washington D.C. Nine newspaper clippings featuring coverage of 'Typists Work in Air', 'Flying Stenographers', 'Life of Lindy Intrigues Bronx Aerial Typist Who Took Notes Above Clouds During Flight'; Press Photo with copy of Charlotte Proctor and Edna Nelson back in New York office. News coverage includes the Daily Mirror, New York Herald Tribune (Aug. 18 and 29, 1928), The World, New York American, New York Telegraph and Bronx Home News (August 19 and 21, 1928), which highlights Nelson's contemplation of giving up stenography to go to aviation school to learn to be a pilot. In her typed notes, she details the pilot of the Wright "Whirlwind" plane, owned by U.S. Air Transport, Inc., the sistership to the Ryan Brougham Monoplane (which Col. Charles Lindbergh used on his flight to Europe). It is her first airplane ride, and with this inaugural flight she is catapulted to local fame as well as being bitten by the bug to fly herself. She describes her view from above, a train appearing like a crawling caterpillar, homes as dog houses, the veil of chiffon which is a cloud. She notices the drops of rain on windshield and was not disturbed at all but upon landing was told that they had been in a very severe rain storm. (Inventory #: 1845)
$1,200.00 add to cart Available from
Little Sages Books
Share this item