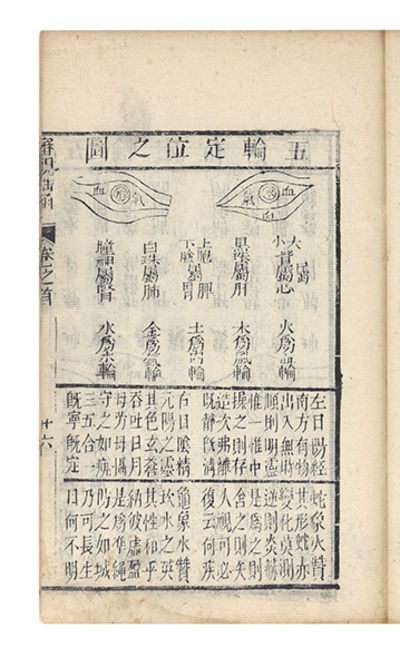 by FU, Renyu
Illus. in the text (Vol. 6 has 13 full-page illus.). Six vols. 8vo, modern wrappers (first leaf of Vol. IV with small defect obscuring one or two characters, Vol. VI with two natural paper flaws touching a few characters of text), new stitching. [China]: two Prefaces dated 1644. First edition of this influential Chinese ophthalmological work, which records 108 types of eye diseases and has more than 300 prescriptions as well as illustrations and plentiful data. The book discusses medical records of ophthalmology and the theory of five orbiculi (illustrated in the first volume), the eight regions of the whites of the eyes, and the relationship between the eyes and Zangfu channels and collaterals. The book introduces acupuncture in ophthalmology and cataractopiesis with a golden needle in detail. There are sections on acupuncture and moxibustion for treatment of headaches. Many pharmaceutical recipes are also provided. Vol. 4 contains an illustration of five kinds of golden needles. The full-page illustrations in the sixth volume depict various patients, their case histories, relevant pressure points (with details of how often to insert the needles), infected eyes filled with pus, wounds to the eye, etc. Nice set. As usual, the paper is lightly browned. Vol. III with some unimportant dampstaining in upper blank margins. ❧ Paul U. Unschuld, Medicine in China: a History of Ideas (University of California Press, 1985), p. 147. (Inventory #: 5952)
$15000.00 add to cart or Buy Direct from
Jonathan A. Hill, Bookseller
Share this item
Jonathan A. Hill, Bookseller, Inc.
Offered by

by (SPOLIATION OF ITALY)