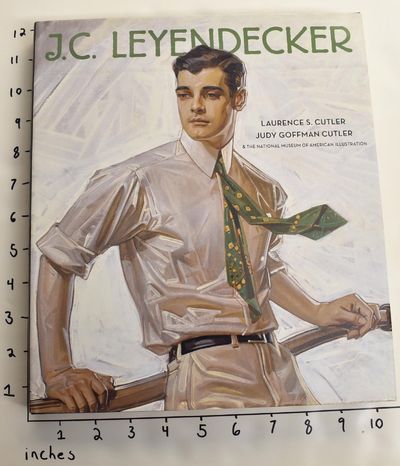 by Laurence S. Cutler, Judy Goffman Cutler
New York: Abrams, 2008. Hardbound. VG/VG-. Shelf wear evident on dust jacket and very slightly on corner of covers.. Color pictorial paper-covered boards, with glossy color pictorial thick dustjacket. 256 pp., profusely illustrated in vivid color, a few bw photographs. From DJ flap: "One of the most prolific and successful artists of the Golden Age Illustration, J.C. Leyendecker captivated audiences throughout the first half of the twentieth century. With a signature style that possessed great warmth and imagination, Leyendecker is perhaps best known for his creation of the archetype of the fashionable male with his advertisements for Arrow Collar in the 1910s through the 1920s. These images sold to an eager public the idea of a glamorous lifestyle, the bedrock upon which modern advertising was built. He also was the creator instantly recognizable icons, such as Santa Claus (conceived as a portly, white-haired man clad in red velvet), that are to this day an integral part of the lexicon of society.An important influence on Norman Rockwell, Leyendecker was commissioned to paint more "Saturday Evening Post" covers than any other artist. Leyendecker lived for much of his adult life with Charles Beach, on whom the stylish men in his artwork was modelled, and while he kept his homosexuality hidden from public scrutiny, he nevertheless gathered a strong following in the gay-interest community. In the first book about the artist in more than twenty years, J.C. Leyendecker features his masterworks, rare paintings and other artwork, including the 322 covers he did for the "Post", as well as other magazines, including Harper's and Collier's..." (Inventory #: 163185)
$35.00 add to cart or Buy Direct from Mullen Books
Share this item

The Graphic Art Of Roi Partridge: A Catalogue Raisonne