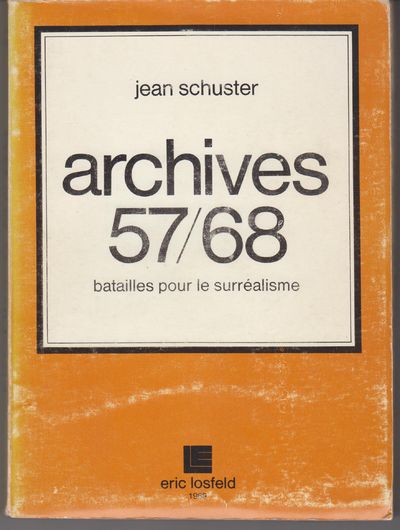 by Schuster, Jean
Paris: Eric Losfeld. 1969. First Edition; First Printing. Softcover. Wraps, very good with rubbed corners and edges, light crease on one corner of rear wrap, reading wrinkles on spine. A nice association copy, signed and inscribed by Jean Schuster in the year of publication, to leading US Surrealists Franklin and Penelope Rosemont. The book was sent to them only a few years after the Rosemonts had met Schuster and Andre Breton in Paris. That was also the same year that Schuster officially ended Surrealism, feeling that the name and term had left Surrealism itself befeft of meaning. (Breton had died in 1966) He was soon to found the journal Coupure which ran from 1969 to 1972. Surrealism continued on in dozens of countries around the world, and Schuster continued to participate in Surrealist activity until he died in 1993. He had played a major role in Surrealism from the time he joined in 1947 until the time he died.; 8vo 8" - 9" tall; 205 pp . (Inventory #: 28093)
$125.00 add to cart Available from Beasley Books
Share this item

The Complete Entertainment Discography from 1897 to 1942. Second Edition

New York : Da Capo Press , 1989
(click for more details about The Complete Entertainment Discography from 1897 to 1942. Second Edition)
View all from this seller>