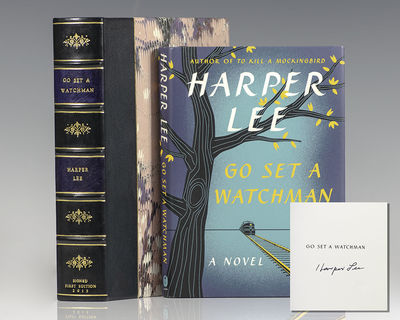 by Lee, Harper
New York: Harper Collins, 2015. First trade edition of Lee's second novel. Octavo, original half cloth. Signed by Harper Lee on the half-title page. This copy was a gift from Lee's attorney Tonja Brooks Carter to a clerk of the court in Monroeville, Alabama. Brooks Carter was responsible for rediscovering the manuscript of this novel and instrumental to its publication. The last signed copy at auction brought 12,000. While signed limited editions are available, signed trade editions are decidedly scarce and with noted provenance. Fine in a fine dust jacket. Jacket design by Jarrod Taylor. Housed in a custom half morocco clamshell box. Written in the mid-1950s, Go Set a Watchman imparts a fuller, richer understanding and appreciation of Harper Lee. Here is an unforgettable novel of wisdom, humanity, passion, humor, and effortless precision--a profoundly affecting work of art that is both wonderfully evocative of another era and relevant to our own times. "Go Set a Watchman is more complex than Harper Lee's original classic. A satisfying novel... it is, in most respects, a new work, and a pleasure, revelation and genuine literary event" (The Guardian). (Inventory #: 62082)
$9,000.00 add to cart or Buy Direct from
Raptis Rare Books
Share this item

New York : Simon and Schuster , 1955
(click for more details about The Europeans.)
View all from this seller>