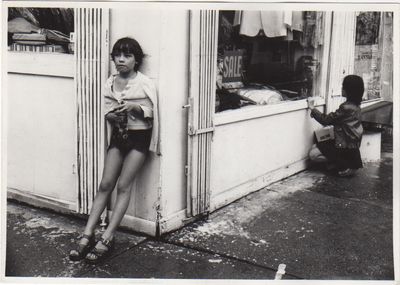 by FRIEDMAN, Walter
New York: Walter Friedman, c. 1960s -1970s. Uniformly very good to near fine with light handling; housed in Friedman's cardboard box.. A collection of approximately 800 unique silver gelatin prints, most measure 5 x 7 inches, printed on various papers. The photographs were taken by Walter Friedman, a largely unknown New York City street photographer who was especially active in the 1960s and 70s. Most images are ink-stamped with his name and sometimes address to the verso; many also have numeric notations in pencil, perhaps suggesting an order not immediately recognizable by looking at the pictures. Friedman lived in the same NYC building as noted underground photographer Don Snyder. The archive was left with Snyder before Friedman's death from AIDS in the 1980s. An incredible overview of bygone New York, from the outer boroughs to Manhattan. Attracted mostly to the margins of the city, and to the city's marginal inhabitants, Friedman has assembled a cast of characters who could be comfortable in the pages of a Diane Arbus book. Like most vernacular archives, however, not every picture is a winner, and several are variants of the same image. That said, of the roughly 800 prints, about half qualify as images of significant merit, either aesthetically, or as important NYC documentation. New York city archives from the 60s and 70s are surprisingly uncommon; this is the first such offering we have handled. (Inventory #: 23297)
$15,000.00 add to cart or Buy Direct from Harper's Books
Share this item
Harper's Books
Offered by

The Journey is the Destination: The Ryan McGinley Purple Book (A special edition for Purple Fashion #19) (Signed Association Copy)