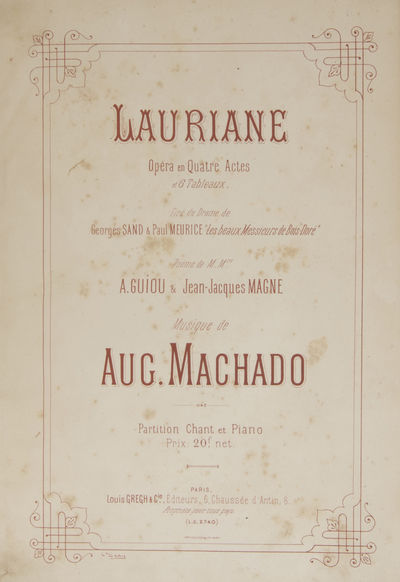 Signed and inscribed by author to [?]José Sabino Vianne dated Milano, 18 May 1889.

Binding considerably worn and somewhat stained; paper loss to lower board; spine slightly skewed and faded; front free endpaper soiled. Minor foxing; some signatures split or partially split; annotations to contents in blue crayon; first page of music and pp. 7/8 detached. First performed in Marseille at the Grand-Théâtre on January 9, 1883 and in Lisbon at the Grand-Théâtre de San Carlos (in Italian) on March 1, 1884.

A Portuguese composer, Machado "studied first in Lisbon, and, intending to become a pianist, went in 1867 to Paris, where he was taught by Lavignac and Danhauser. Back in Lisbon he composed his first works; dissatisfied with the predominating Italian influence in his style, however, he returned to Paris in 1873, and while there was in contact with Massenet and Saint-Saëns and was considerably influenced by them. His new French stylistic orientation is most clearly evident in the opera Lauriane (on a French libretto by Guiot, after George Sand); it was successfully produced in 1883 at Marseilles, and later at Lisbon and Rio de Janeiro, and marked the beginning of his international fame." José Carlost Picoto in Grove Music Online. (Inventory #: 29362)
$176.00 add to cart or Buy Direct from
J. & J. Lubrano Music Antiquarians
Share this item