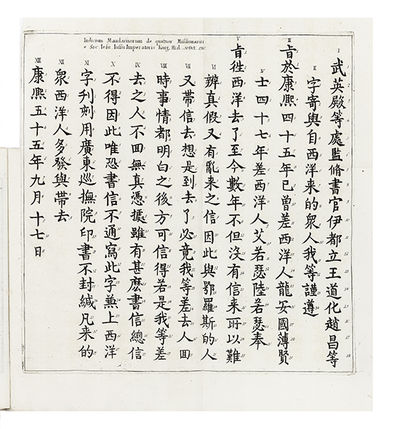 by MURR, Christoph Gottlieb von, ed
Three text leaves with Chinese characters, final conjugate leaf a full-page woodcut with about 65 Chinese characters, & a large folding engraved plate printing in Chinese characters the Kangxi Emperor's edict of 1716. 58, [1] pp. Large 4to, orig. decorative wrappers, uncut. Nuremberg & Altdorf: Monath & Kussler, 1802. First and only edition of an extremely uncommon book. Murr (1733-1811), a resident of Nuremberg, was a scholar with polymathic interests. He edited several intellectual journals, published on libraries and art museums, etc. This work is, in large part, concerned with the Chinese Rites Controversy and the famous "Red Decree." The Jesuit missionaries who came to China in the late 16th century tried to accommodate their message as much as possible to the customs of the literati classes which they had identified as the most susceptible for conversion. This included the toleration of certain practices, such as ritual sacrifices to ancestors, which might be construed as incompatible with Catholic teaching. The urbane manners, linguistic skills and scientific accomplishments of the Jesuits won them the confidence and admiration of the highest circles of society, including the Emperor himself, but also the enmity and jealousy of rival Catholic orders, giving rise to the so-called "Rites Controversy." In 1704 Pope Clement XI forbade a number of practices permitted by the Jesuits, including "ancestor worship" and sent a Papal Legate to explain the matter to the Kangxi Emperor in person. The Emperor was confused and annoyed by what he perceived as attempts to interfere with the internal affairs of China. In 1706 he sent Fathers Barros and Beauvollier, Jesuits resident at his court, back to Europe in order to obtain clarification. They perished at sea. Two years later he sent two more Jesuits, Fathers Provana and Arxo on a similar mission. They both died before they could return to China. In 1716, since nothing more had been heard of his envoys, the Emperor decided to send an open letter, the so-called "Red Decree," to be given to foreign merchants returning to Europe, enquiring about their fate. In the letter, the Emperor stated that he will not give credence to any documents regarding the Rites Controversy until his envoys return. The letter was composed by the Emperor himself and was in Manchu (the official dynastic language), Chinese and Latin. The style of the Chinese text is colloquial, unusual in an official document, perhaps so it would be more intelligible to foreigners. Murr found the papers of Ignaz Kögler (1680-1746), the German Jesuit who had worked in the Imperial Observatory in Beijing from 1717, in the Jesuit college of Bamberg and decided to publish his Latin translation of the "Red Decree" together with other material relating to the Jesuits in China. The "Red Decree" is reproduced in Chinese on the large folding engraved plate ("Indicium Mandarinorum de quatuor Missionariis e Soc. Jesu. Iussu Imperatoris Kanz-Hi, 31 Oct. 1716"). For every character he gives a translation and explanation based on the texts left by Kögler (pp. 11-21). There follows the Latin text of the edict (pp. 21-22) with explanations, followed in turn by various miscellanea about the state of affairs in the Jesuit mission 1766-1800 (pp. 26-28) and about Kögler and his astronomical observations and publications (pp. 28-32). There follows eight pages which contain a list of Jesuit publications of a mathematical, astronomical, scientific, and philosophical nature printed in China. Pages 41-55 contain "Notitiae Sinicae." On pp. 56-58 there is a transcription of the list of Chinese quadrupeds arranged according to the Linnaean method with a letter from Linnaeus to Murr dated 22 March 1776. The list in Chinese characters numbered 1 to 42 is found on p. 59. Fine fresh copy. ❧ Cordier, Sinica, col. 638. Löwendahl 718. (Inventory #: 5973)
$6,000.00 add to cart or Buy Direct from
Jonathan A. Hill, Bookseller
Share this item
Jonathan A. Hill, Bookseller, Inc.
Offered by