Holy Bible, Conteyning the Old Testament, and the New 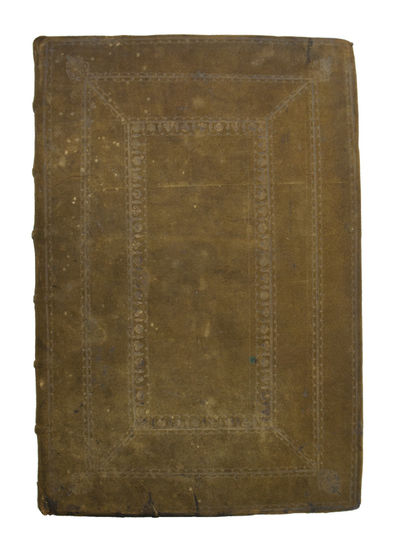 by BIBLE IN ENGLISH
The 1613 Folio Edition of the King James Bible [BIBLE IN ENGLISH]. The Holy Bible, Conteyning the Old Testament, and the New: Newly translated out of the Originall Tongues: and with the former Translations diligently compared and revised by his Maiesties speciall Commandement. Appointed to be read in Churches. London: Imprinted...by Robert Barker, 1613. The 1613 folio edition of the King James Bible, distinguishable from the ìHeî and ìSheî Bibles that precede it by its smaller type size making it double columns, with seventy-two lines. The Authorised version.vWith the Apocrypha. Folio (15 3/4 x 10 1/2 inches; 398 x 265 mm.). A4-B4, C6, D4, A6-C6, A6-4M6, 4N4. 508 leaves. Issued with "The genealogies recorded in the Sacred Scriptures" by John Speed, pages ([2], 34 pp.). Without double-page engraved map before text, which is often the case. Engraved general title, representing the twelve tribes. At foot of title-page woodcut: "Cum priuilegio". Engraved New Testament title dated 1613. Black letter. With the "Calendar" which is printed in red and black. Decorative woodcut head- and tail-pieces and initials. Contemporary reversed paneled calf. Boards ruled in blind. Boards with a small amount of rubbing and chipping, mainly along the edges. First title-page laid-down. Some loss to margins, but not affecting the engraving. Leaves A2-A4 (To The Reader) bound on stubs and with lower marginal repairs. From the Calendar, Leaf C2 with marginal repair and Leaves C3-C4 remargined. Leaf D1 with paper repair, only affecting ruled border. Leaves X1-X2 with some tape repairs, and a few holes with some loss of a few words. Leaves PP5-PP6 with some dampstaining. Leaves UUU3-UUU4 with bottom margin repaired, not affecting text. Leaf ZZZ4 with a closed tear, repaired, but with some loss of text. Aside from these few (mostly preliminary) leaves, overall this copy is internally very fresh and clean. A very good copy. ìThe true 1613 folio edition of King Jamesí Bible; easily distinguishable from the other large folio editions by its smaller type... The preliminary leaves are set up as in the other large folio editions, but the text is printed in smaller type with 72 lines instead of 59 lines to the full column." (Herbert, 322). The Genealogies which accompany this book have a similar typographical history to that of the King James Bible itself. John Speed was granted a patent in 1610 for ten years to issue and insert his Genealogies and double-page general map (engraved by Elstrack) in every edition of this Bible. ìThe King James Bible, or the Authorized Version, as it is now commonly (but not strictly accurately) known, was the outcome of the conference summoned at Hampton Court by the King in January 1604, in an attempt to settle the quarrels in the Church of England, arising from the Puritan zeal of some of its members. It was the leader of the Puritan party, John Reynolds, the President of Corpus Christi College, Oxford, who first suggested the idea of a new translation...It has been described as ëthe only literary masterpiece ever to have been produced by a committeeí and was the work of nearly fifty translators, organized in six groups...Being based on a wider range of classical and oriental scholarship than its predecessors, the Authorized Version was a more learned text...No new English translation was produced until the Revised Version of 1881, and the influence of the Authorized Version may best be described in the words of G.M. Trevelyan. ëFor every Englishman who had read Sidney or Spenser, or had seen Shakespeare acted at the Glove, there were hundreds who had read or heard the Bible with close attention as the words of God. The effect of the continual domestic study of the book upon the national character, imagination and intelligence for nearly three centuries to come, was greater than that of any literary movement in our annals, or any religious movement since the coming of St Augustineíî (Printing and the Mind of Man 114, describing the 1611 first edition). Darlow & Moule 249. Herbert 322. STC 2226. ESTC S122066. HBS 67889. $23,500 (Inventory #: 67889)
$23,500.00 add to cart Available from
Heritage Book Shop
Share this item

Los Angeles : 1905
(click for more details about ìMemories, Some of the Dim Old Pictures That Hang on Memory's Wall.î)

Washington, D.C. : Printed by Order of the United States' Senate , 1843
(click for more details about Report of an Exploration of the Country Lying Between the Missouri River)
View all from this seller>