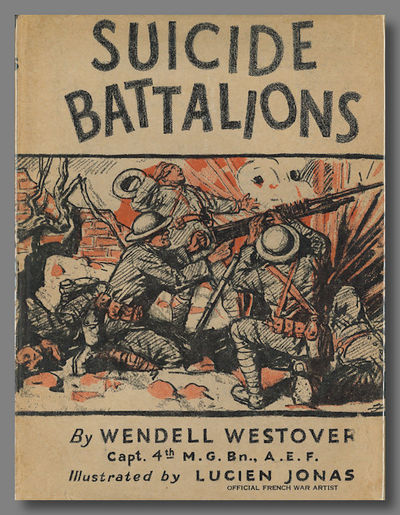 by [World War I Literature]: Westover, Wendell
New York & London: G.P. Putnam's Sons, 1929. Small quarto. Gilt black cloth. Pictorial endsheets. Frontis, illustrations and plates. Folding map. Non-authorial gift inscription on dedication page, trace of foxing to endleaves, otherwise near fine in lightly edgeworn and nicked highly pictorial dust jacket, with a couple of small surface abrasions. First edition. Beautifully illustrated with photogravures of etchings by Lucien Jonas, an "Official French War Artist." A series of semi-fictional sketches based on the author's experiences as a Captain with the 4th Machine Gun Battalion in France, somewhat in the tradition of Thomason's FIX BAYONETS! The inscription noted is to a Captain serving at Fort Kamehameha, June 12, 1929, "with love from 'Your Mary'." FALLS, p. 301. (Inventory #: WRCLIT78578)
$175.00 add to cart or Buy Direct from
William Reese Co. - Literature
Share this item

THE PENTAGRAM PRESS COMMONPLACE BOOK A SELECTION OF TYPOGRAPHIC INTERPRETATIONS

THE WORDS OF THE MASTERS REFLECTIONS ON THE FINE ART OF TYPE DESIGN ...

[Maple Shade, NJ] : The Pickering Press , [1982].
(click for more details about THE WORDS OF THE MASTERS REFLECTIONS ON THE FINE ART OF TYPE DESIGN ...)
View all from this seller>