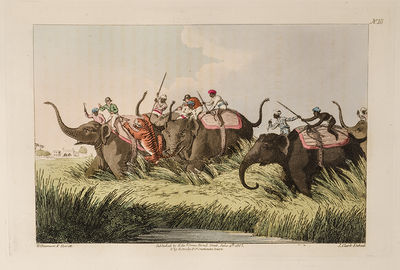 WILLIAMSON, Captain Thomas, [Author, Illustrator], [HOWITT, Samuel, Illustrator]. Oriental Field Sports; Being a Complete, Detailed, and Accurate Description of the Wild Sports of the East; and exhibiting, in a novel and interesting manner, the Natural History of the Elephant, the Rhinoceros, the Tiger, the Leopard, the Bear, the Deer, the Buffalo, the Wolf, the Wild Hog, the Jackall, the Wild Dog, the Civet, and other Undomesticated Animals... as likewise the different species of Feathered Game, Fishes, and Serpents. The Whole interspersed with a variety of Original, Authentic, and Curious Anecdotes, Taken from the Manuscript and Designs of Captain Thomas Williamson... The Drawings by Samuel Howitt, Made Uniform in Size, and Engraved by the First Artists. Second Edition. London: Published by Edward Orme, [1819].

The second edition of the finest book ever published on Indian sport and one of the great plate books of the period.
Two cheaper editions published in 1807 and 1808 were both reduced in size. Williamson served in a British regiment in Bengal and was an avid sportsman while there. After being recalled to England, Williamson"s knowledge of wild life and Oriental sports come to the notice of Orme, who contracted this present work from 1805-1807. The painter Samuel Howitt was hired to prepare finished watercolors based on Williamson"s original sketches during his time in India. The result was "the most beautiful book on Indian sport in existence" (Schwerdt).