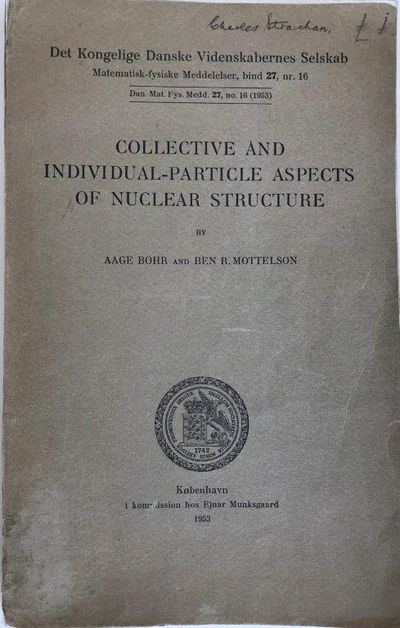 by BOHR, Aage Niels (1922-2009); Ben Roy MOTTELSON (1926-).
Copenhagen:: Ejnar Munksgaard, 1953., 1953. 8vo. 174 pp. Original printed wrappers; joints repaired with kozo. Ownership signature of Prof. Charles Strachan. Very good. Offprint. From: Det Kongelige Danske Videnskabernes Selskab Matematisk-Fysiske Meddelelser, Bind 27, Nr. 16. Aage Niels Bohr shared the 1975 Nobel Prize for Physics with Ben Roy Mottelson and Leo James Rainwater, "for the discovery of the connection between collective motion and particle motion in atomic nuclei and the development of the theory of the structure of the atomic nucleus based on this connection" :: [this paper]. "On my return to Copenhagen in the autumn of 1950, I took up the problem of incorporating the coupling suggested by Rainwater into a consistent dynamical system describing the motion of a particle in a deformable core. Soon, I was joined by Ben Mottelson in pursuing the consequences of the interplay of individual-particle and collective motion for the great variety of nuclear phenomena that was then coming within the range of experimental studies" :: Bohr's Nobel Lecture. "According to modern physics, an atomic nucleus consists of nucleons - protons and neutrons. In earlier models the nucleus was depicted as being spherical, but this proved to be inaccurate. In 1950 James Rainwater postulated that the atomic nucleus can be distorted. The nucleons in the outer portions of the atomic nucleus move about in paths and interact with nucleons inside, causing the nucleus to be distorted. Independently of Rainwater, Aage Bohr arrived at the same theory and corroborated it through experiments in collaboration with Ben Mottelson in 1952 and 1953." :: NobelPrize. PROVENANCE: Charles Strachan (1907-1993), Scottish mathematician and physicist, Reader at the University of Aberdeen, he mentored Sir George Paget Thomson FRS (1892-1975), the son of J.J. Thomson, who earned the Nobel Prize for Physics in 1937 for his discovery of the wave properties of the electron by electron diffraction. "Quantum ideas were being shaped into a mathematical theory which could be applied to a vast range of hitherto intractable problems. Charles Strachan was to be among the young mathematical physicists who seized on the opportunities thus offered. He duly completed his undergraduate work in Aberdeen with a First Class Honours degree. At that time it was standard practice in Scottish universities for the best graduates aiming at an academic career to read for a further undergraduate degree at Oxford or Cambridge. G P Thomson arranged for him to go to Thomson's former Cambridge College (Corpus Christi), where he undertook an accelerated tripos, attending courses by such great names in relativity and quantum theory as Eddington and Dirac. Charles Strachan achieved the distinction of becoming Junior Wrangler. He then embarked on research at Cambridge, first under R H Fowler and then under J E Lennard Jones, and was awarded a Cambridge PhD in 1935. Prominent among his pre-war researches were investigations, the earliest in collaboration with Lennard Jones, of the interaction of atoms and molecules with solid surfaces. These papers brought out some important quantum effects in the behaviour of systems of many atoms and presented mathematical procedures which made possible the application of quantum mechanics to the quantitative treatment of these effects. They represented significant early contributions not only to surface physics but more generally to aspects of solid state physics which are still the subject of extensive investigation. Part of this work was done at Aberdeen, where he held an assistantship and then a lectureship between 1933 and 1937. In 1937 he was invited by Professor Max Born to take up a temporary lectureship for one year in his Department in Edinburgh and he clearly decided that the opportunity of working with this very great theoretical physicist could not be missed." :: C. W. McCombie. (Inventory #: S13218)
$45.00 add to cart Available from
Jeff Weber Rare Books
Share this item