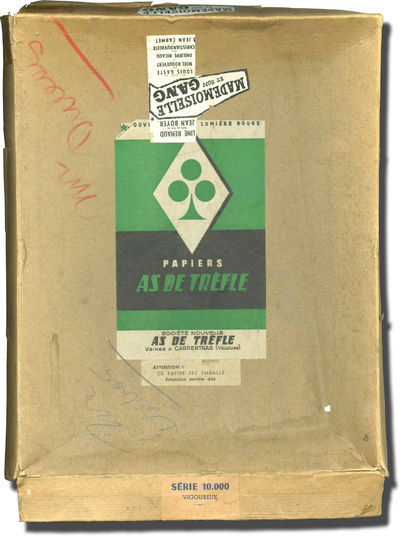 Renaud, who later became a prominent AIDS activist, stars as a writer whose crime fiction entry attracts the attention of swindlers, even as she joins a gang and becomes its leader. Little known film by Boyer, whose credits include "Calais-Douvres" (1931), "End of the World" (1931), "Roses noires" (1935), "Serenade" (1940), and "One Does Not Die That Way" (1946).

Cinedis was prominent during the French New Wave, distributing and promoting some of the genre's greatest films, including "Jules and Jim," "Le Trou," "The Gates of Paris," even the popular "Don Camillo" series starring Fernandel.

Curling to photos, box Good only, else Near Fine overall. A fantastic tribute to actress and singer Renaud's beauty, and a glimpse behind the scenes. (Inventory #: 142759)
$350.00 add to cart or Buy Direct from Royal Books
Share this item
Royal Books, Inc.
Offered by