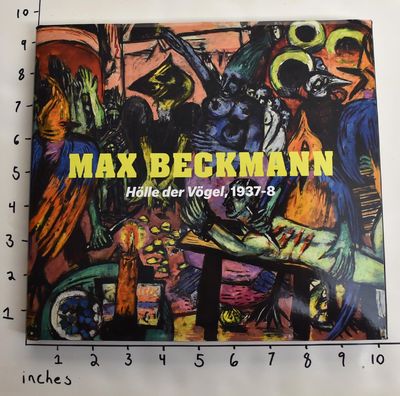 by Brown, Robert
London: Christie, Manson & Woods International Inc, 2017. Hardcover. NF/VG. Black cloth/boards. Yellow and blind-stamp lettering. Color-illustrated dj with yellow/white lettering on black spine. 106 pp. full of color images and bw archival photo views. The catalogue about Beckmkann's single work, sold at the Impressionist & Modern Art Evening Sale, Tuesday 27 June, 2017 in London. "'This painting is a warning about what can happen if we don't listen to our impulse to transcend our own human tendency to destroy,' says art historian Jill Lloyd of Hölle der Vögel (Birds' Hell ) by Max Beckmann (1884-1950). 'Painted at a very fraught moment in his own life and a very fraught moment in European politics, this is a very major painting - a compelling and striking image that once seen, it's impossible to forget.' Hitler became German Chancellor in 1933 and Beckmann almost immediately lost his job at the Art School in Frankfurt. In 1937, the Degenerate Art exhibition took place in Munich. 'It was hung in a very haphazard way,' Lloyd says, 'with lots of slogans calling [the artists] "cultural Bolsheviks", or [describing the works] as "the art of the insane".' Hitler gave a speech in which he threatened artists who created such works with imprisonment or castration. Beckmann listened to this speech, and within a few hours he was on a train to Amsterdam. He never set foot in Germany again. Beckmann's sister-in-law lived in the Dutch capital, where the artist and his wife settled in a two-room apartment. Birds' Hell was one of the first paintings that he made there. On Beckmann's completion of the painting in 1938, Hölle der Vögel (Birds' Hell) was hung privately in the Paris apartment of the artist's friend and promoter, Kathe von Porada, where she encouraged a discreet audience of sympathetic admirers to view the painting. It was to remain there throughout the German occupation of France until after the war, when, like the Beckmanns themselves, it travelled to New York." - Christies.com / "The colourful painting shows a group of large birds, among them a black and gold one and a many-breasted woman next to it who is emerging from an egg. The bound naked man whose back one of the birds is cutting into, the extended saluting arm of the woman which seems to be answered with the same gesture by a group of people in the background, the abhorrent appearance of the black and gold one bird and the altogether terrifying goings-on present a barely-disguised look at the Nazis and their victims, to which the "degenerate" artist Max Beckmann belonged. Beckmann titled a sketch of the painting Land d. Wahnsinnigen [Land of Madmen]..." (Inventory #: 163334)
$150.00 add to cart or Buy Direct from Mullen Books
Share this item