Homer, Eakins, & Anshutz : the search for American identity in the gilded age 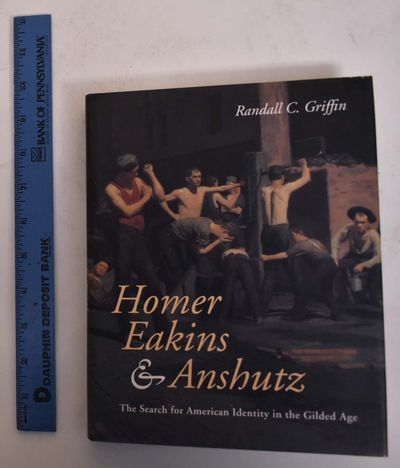 by Griffin, Randall C.
University Park, Pennsylvania: The Pennsylvania State University Press, 2004. Hardcover. VG+/VG+. Taupe cloth/boards; gilt lettering. Color-pictorial dj with white lettering on spine. xxviii, 178 pp. with 8 color plates and 65 bw figures. "Randall Griffin's book examines the ways in which artists and critics sought to construct a new identity for America during the era dubbed the Gilded Age because of its leaders' taste for opulence. Artists such as Winslow Homer, Thomas Eakins, and Thomas Anshutz explored alternative "American" themes and styles, but widespread belief in the superiority of European art led them and their audiences to look to the Old World for legitimacy. This rich, never-resolved contradiction between the native and autonomous, on the one hand, and, on the other, the European and borrowed serves as the armature of Griffin's innovative look at how and why the world of art became a key site in the American struggle for identity." "Homer, Eakins, and Anshutz will be of importance to all those interested in American culture as well as to specialists in art history and art criticism."--Jacket. (Inventory #: 163364)
$45.00 add to cart or Buy Direct from Mullen Books
Share this item