Captain Watson's Travels in America: The Sketchbooks and Diary of Joshua Rowley Watson, 1772-1818 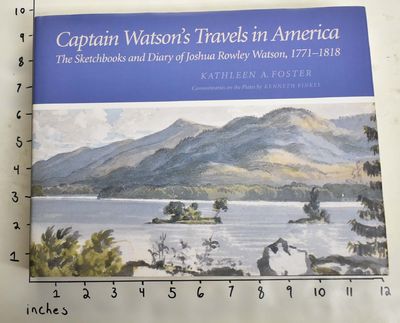 by Foster, Kathleen A. and Kenneth Finkel
Philadelphia: University of Pennsylvania Press, 1997. Hardcover. NF/NF. Slate blue cloth/boards; silver lettering. Color-pictorial blue dj with white lettering on spine. xii, 372 pp. with 90 bw plates, 18 color plates, and 69 bw figures. From 1816 to 1817, British Naval Captain Joshua Rowley Watson visited friends in Philadelphia and toured the northeastern United States. During that time he filled two sketchbooks and a diary with impressions of travels that took him to Washington, Boston, and the wilds of the Hudson River valley. Watson's record proves to be a charming and graceful observation of the American scene - particularly of Philadelphia, as Watson includes an extensive overview of Eaglesfield, the country house on the Schuylkill River where he stayed. With a style that is reminiscent of eighteenth-century British topographical draftsmen, Watson's watercolors joined the flow of British art into America that ultimately formed and inspired the Hudson River school. Art historian Kathleen Foster has now gathered this previously unpublished material into a handsome volume that presents a fresh view of American art, architecture, landscape, and society in the Jeffersonian era. Her book comprises an extended essay on Watson's life and travels, a discussion of his artistic style, a guide to the diary, and the complete diary itself. Includes some lovely views and history of the lower Susquehanna River around Columbia and Wrightsville, Pennsylvania. (Inventory #: 163376)
$24.99 add to cart or Buy Direct from Mullen Books
Share this item