Confessions of an Advertising Man. 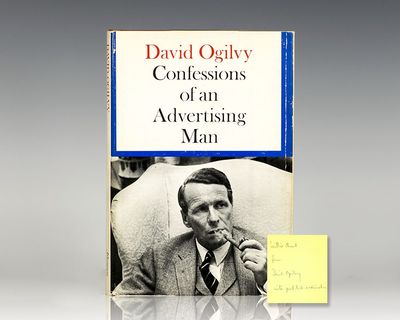 by Ogilvy, David
New York: Atheneum, 1963. First edition of this seminal work on advertising. Octavo, original cloth. Warmly inscribed by the author in the year of publication on the front free endpaper, "Willis Shank from David Ogilvy with gratitude and admiration November 1963." Fine in a near fine dust jacket with a touch of rubbing. On the verso of the dust jacket there are "samples of David Ogilvy's wizardry," and it unfolds to reveal six advertisements he created. David Ogilvy was considered the "father of advertising" and a creative genius by many of the biggest global brands. First published in 1963, this seminal book revolutionized the world of advertising and became a bible for the 1960s ad generation. It also became an international bestseller, translated into 14 languages. Fizzing with Ogilvy's pioneering ideas and inspirational philosophy, it covers not only advertising, but also people management, corporate ethics, and office politics, and forms an essential blueprint for good practice in business. (Inventory #: 62092)
$1,500.00 add to cart or Buy Direct from
Raptis Rare Books
Share this item

When She Was Good.

New York : Random House , 1967
(click for more details about When She Was Good.)

Promises to Keep: On Life and Politics.

New York : Random House , 2007
(click for more details about Promises to Keep: On Life and Politics.)
View all from this seller>