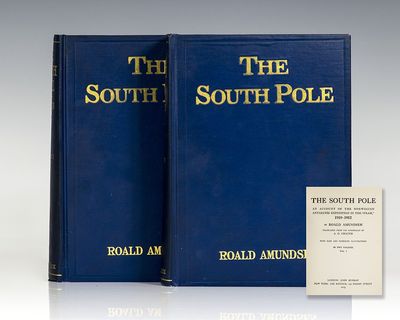 by Amundsen, Roald
New York: Lee Keedick, 1913. First editions of Amundsen's memoir of the race to the South Pole. Octavo, original blue cloth, gilt titles to the spine and front panel, 100 plates, 5 maps (3 folding), and 16 text figures. In very good condition, bookplates. Scott's expedition to the South Pole was well-publicized, but his rival Roald Amundsen strategically kept the destination of his ship, the Fram, secret until the last moment. When the Norwegian finally revealed he was bound for the Pole, the backer of the British expedition opined that the Fram "has no more sailing qualities than a haystack. In any case, Scott will be on the ground and settled long before Amundsen turns up, if he ever does." There were crucial differences in approach from Scott's ill-fated expedition: dogs, rather than men, provided the raw power needed to pull equipment (they also eventually provided a food source) and the Norwegian crew knew to wear fur clothing rather than the wool used by the British team. Amundsen's party reached the Pole 34 days ahead of Scott. He wrote later in his diary, "The North Pole had attracted me since the days of my childhood, and so I found myself at the South Pole. Can anything more perverse be conceived?" (Huntford, 44). (Inventory #: 64022)
$1,800.00 add to cart or Buy Direct from
Raptis Rare Books
Share this item

New York : Gnome Press, Inc. Publishers , 1950
(click for more details about I, Robot.)
View all from this seller>