Portraits of the Class of 1858, Amherst College, Amherst, Mass 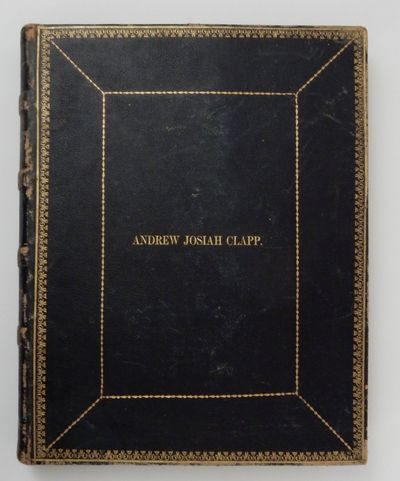 by [ Amherst College ]
Springfield: D. B. Spooner & Co., Photographers, 1858. First Edition. Boards. Very Good. First Edition. Title page and "statistics" (four pages) plus 62 portraits w/tissue guards and interleaved blank leaves (most with signatures or inscriptions from the sitter). Frontispiece engraving of the college signed: "Thos. Chubbuck, Engr. Springfield, Ms." and "Published by J.S. & C. Adams" Statistics leaf signed in print on verso "Samuel Bowles and Company, printers." 4to. 9 1/2 x 12 inches. Decorated leather binding (worn at extremities). "Andrew Josiah Clapp" in gilt on front cover [his album]. "Portraits | Amherst | 1858" in gilt on spine. Two library stamps ("Southampton Public Library") crossed out with no other markings. Photographs are salt prints, oval format, approximately 4 ¾ x 6 inches. Tonality varies, with scattered fading and foxing. Boards. Leaf titled "Statistics" has a list of each student, residence, and when they entered and left college (and if graduated). It also notes that there are 84 total, 67 who entered at the beginning of the Course, 1 who died, and 51 who graduated. The Statistics page is dated Amherst College, August 12th, 1858 and printed by Samuel Bowles and Company.

Portraits one through nine are identified faculty members. The next portrait appears to be a faculty member, but we haven't been able to identify him. The second faculty portrait, and probably best known of the sitters, is Edward Hitchcock, with "best wishes from your friend Edward Hitchcock" in manuscript on opposite page.

Portraits number eleven through sixty-two are identified students from Amherst (with the exception of the 21st member who we haven't been able to identify). There are a few additional signatures without portraits included in the rear.

In our experience, salt print era photograph albums are much scarcer than the albumen era albums. Often the graduates had to pay for the portraits they wanted in the album, and hence different albums have different contents. With the printed title page and "statistics" leaf in this album, we aren't sure if this is the case or not. It is however, a rare album, with only one copy in OCLC/Worldcat as of this writing, at the American Antiquarian Society (theirs with 63 portraits). (Inventory #: 26554)
$5,500.00 add to cart or Buy Direct from Kuenzig Books
Share this item