The Life of Lord Viscount Nelson. Illustrated by engravings of it’s most striking and memorable incidents. 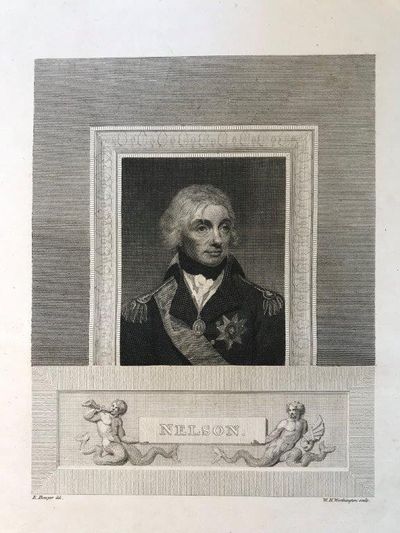 by [NELSON, Lord Viscount] CHURCHILL, T. O.
London:: J. and W. Macgavin, 1808., 1808. 4to. viii, 100 pp. Portrait frontis., finely engraved plates, some folding, also a folding handwritten letter in facsimile; folded letter wrinkled, slight tear to folding plate depicting stately funeral scene, stained margins to frontis. and some pages, esp. p. 55. Holes top margin p. 21 to rear pastedowns. Original gilt ruled diced Russia calf, five raised bands on gilt-spine; worn extremities, tail portion missing, joint near tail cracked, worm trails text margins front and back. Generally very good. FIRST EDITION. Horatio Nelson, 1st Viscount Nelson, (29 September 1758– 21 October 1805) was a British flag officer famous for his service in the Royal Navy, particularly during the Napoleonic Wars. He was noted for his inspirational leadership and superb grasp of strategy and unconventional tactics, which resulted in a number of decisive naval victories. He was wounded several times in combat, losing one arm and the sight in one eye. Of his several victories, the best known and most notable was the Battle of Trafalgar in 1805, during which he was shot and killed . . . Nelson’s death at Trafalgar secured his position as one of Britain’s most heroic figures. Numerous monuments, including Nelson’s Column in Trafalgar Square, London, have been created in his memory and his legacy remains highly influential. - Wikip. (Inventory #: LV2309)
$750.00 add to cart Available from
Jeff Weber Rare Books
Share this item

Algebraic Number Fields (L-functions and Galois properties). Proceedings of a symposium organised by the London Mathematical Society with the support of the Science Research Council and the Royal Society.

London & New York: : Academic Press, 1977. , 1977
(click for more details about Algebraic Number Fields (L-functions and Galois properties). Proceedings of a symposium organised by the London Mathematical Society with the support of the Science Research Council and the Royal Society.)

Methods of representation theory with applications to finite groups and orders.

New York: : John Wiley & Sons, 1981, 1987. , 1981
(click for more details about Methods of representation theory with applications to finite groups and orders.)
View all from this seller>