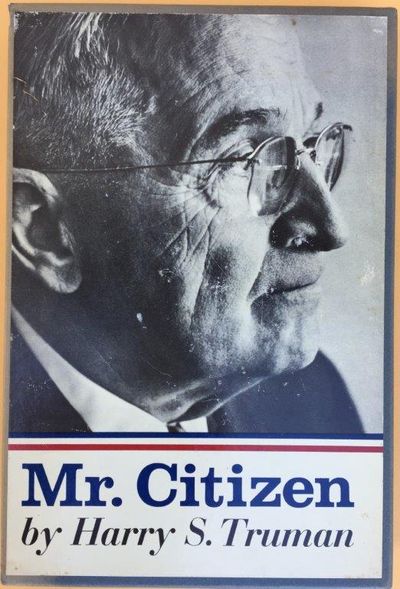 by TRUMAN, Harry S.
(New York):: Random House; Bernard Geis Assoc., (1960)., 1960. 8vo. 315 pp. Illus. Brick red cloth, gilt spine with red and blue painted 'labels', original glassine wrapper included; 4 small foxing marks to front fore-edge. With the original pictorial slip-case; a bit rubbed, some fading to box. Very good +. LIMITED EDITION of 1,000 copies, SIGNED by President Truman. This is number 704. Included is a first-day-of-issue stamp honoring Truman's life (May 8, 1973). Note: Benjamin Franklin's father, Josiah Franklin, was a tallow chandler, a soap-maker and a candle-maker. He was born at Ecton, Northamptonshire, England, on December 23, 1657, the son of Thomas Franklin, a blacksmith-farmer, and Jane White. Benjamin Franklin himself was known to visit Ecton. Thus one of the founding fathers of the United States had roots in Ecton. Franklin himself wrote, "The notes one of my uncles (who had the same kind of curiosity in collecting family anecdotes) once put into my hands, furnished me with several particulars relating to our ancestors. From these notes I learned that the family had lived in the same village, Ecton, in Northamptonshire, for three hundred years . . . is eldest son Thomas lived in the house at Ecton, and left it with the land to his only child, a daughter, who, with her husband, one Fisher, of Wellingborough, sold it to Mr. Isted, now lord of the manor there." - Franklin's autobiography. (Inventory #: LV2312)
$1,250.00 add to cart Available from
Jeff Weber Rare Books
Share this item