The Works. . . With several Additional Pieces, Never before printed in any Edition of his Works. To which is prefixed, A New Life of the Author, By Mr. Mallet. 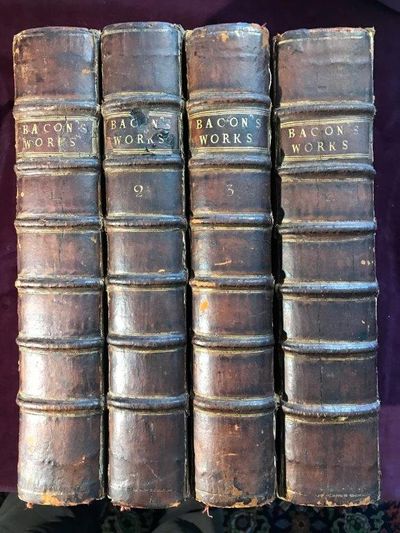 by BACON, Francis (1561-1626).
London:: For A. Millar, 1740., 1740. Four volumes. [Vol. 3 has imprint: London, J. Walthoe [etc.]]. Folio. [8], iv, lxxxii, 394, [38], 124; [iv], 568*, [28]; [ii], 586, [46]; [ii], 740, [28] pages. Four engraved frontispieces engraved by George Vertue (1684-1756) [2] and Wenceslaus Hollar (1607-1677) [1] (vol. III), title-vignettes, individual title-pages for each of the four volumes, 2 folding tables (vol. II, within pagination), subscriber's list. Titles printed in red & black; text in Latin and English, indexes. Contemporary calf, hinges cracked but cords intact, edges shelf-worn, some scarring. 3-line inked inscription ffep, vol. III. Armorial bookplates of Sir Godfrey Webster, Bart., and Edward Shipperdson. Good. First Complete Collected edition in English, many of the letters were not inserted in the 1730 printing and "some never before published. . . " The biography by Mallet is also new. Dedicated to Dr. Richard Mead. Bacon's "insistence on making science experimental and factual, rather than speculative and philosophical, had powerful consequences. He saw clearly the limitations of Aristotelian and scholastic methods". Bacon's influence on Locke and through him on subsequent English schools of psychology and ethics was profound. Leibniz, Huygens and particularly Robert Boyle were deeply indebted to him, as were the Encyclopedistes and Voltaire." - Printing and the Mind of Man. Selected contents: Mallet's Life of Francis Bacon, De Dignitatae & Augmentis Scientiarum; Novum Organum Scientiarum, De Interpretatione Naturae, Historiam Naturalis & Experimentalis, The Advancement of Learning, Natural History, Physiological Remains [on metals], Questions touching minerals, Dr. Meverel's Answers to the foregoing questions, Certain Experiments of the Lord Bacon's about the Commixture of Liquors only, not Solids, Medical Remains, New Atlantis, Essays and Cousels Civil and Moral, A Fragment of the Colours of Good and Evil, Apophthegms, History of the Reign of King Henry VII and Henry VIII, The Beginning of the History of Great Britain, Considerations touching a War with Spain, numerous speeches in Parliament, letters, etc. PROVENANCE: Seems likely: Sir Godfrey Webster, 4th Baronet (1747-1800), of Battle Abbey, was an English politician. He was elected a Fellow of the Royal Society in 1786. Due to gambling losses he committed suicide by shooting himself on 3 June 1800. Edward Shipperdson (1780-1855), of Pittington Hall Garth, Co. Durham. See: The Gentleman's Magazine, Volume 45, obituary, pp. 189-190. DNB; ESTC t52745; Gibson 256; Lowndes I p.93. [EXTRA POSTAGE WILL APPLY]. (Inventory #: LV2302)
$1,100.00 add to cart Available from
Jeff Weber Rare Books
Share this item

The Serpent Power being the Shat-chakra-nirupana and Paduka-panchaka ... Translated ... with introduction and commentary by Arthur Avalon.

London: : Luzac & Co., 1919. , 1919
(click for more details about The Serpent Power being the Shat-chakra-nirupana and Paduka-panchaka ... Translated ... with introduction and commentary by Arthur Avalon.)
View all from this seller>