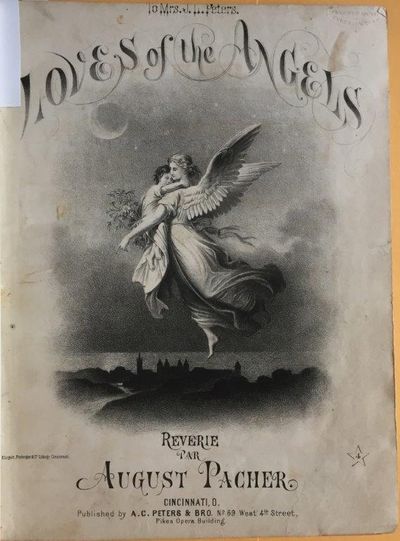 by [Music] Annie Van Eaton (1874-1951); Lorenz Kussner. Lorenz Kussner - music merchant [Kussner's Palace of Music].
Terre Haute, Indiana.: Flourishing 1865-1880; music sheets from 1848-1871., 1865. Folio. 4 CHROMOLITHOGRAPHIC PLATES & 5 LITHOGRAPHS. Annie was the wife of Samuel Milton Call (1847-1924), and later Reverend Henry Clay Sprinkle (1868-1955). Bound volume containing 28 music scores for piano. Illustrated title-pages done with ornamentation or printed in lithography (9), of which 4 are color. Volume is worn. Good. Unique collection of 28 American music scores for piano, dating from 1848-71, including specimens printed in New York, Boston, Chicago, Cincinnati, St. Louis, Milwaukee, Cleveland, Nashville and Louisville. This group features nine lithographs by such firms as Ehrgott. Forbriger & Co., Lithographers, Cincinnati [4]; Ehrgott & Krebs, Lithographers ; Color lithography by Sarony & Co., New York; Lithographed title by E.H. Pigott, Forbriger & Co., Cincinnati. This collection was bound together for Annie Van Eaton, whose name is featured on the cover. Her music teacher, Lorenz Kussner, of Terre Haute, Indiana, clearly had experience with the pieces selected. PROVENANCE: [Lorenz Kussner], Pianos & Music, Terre Haute, Indiana. Kussner was a dealer in musical merchandise, born in Hasse-Darmstadt, Germany in 1836. In 1852 he immigrated to the Unites States, settling in New York briefly before relocating to Cincinnati. While in Dayton, Ohio, he apprenticed to a piano manufacturer. After four years he moved again to Crawfordsville, Indiana and the Greencastle, IN, teaching music. In 1864 he arrived in Terre Haute and opened his retail music store. After a year the building burned down. In August 1857 he married Emilie Weinhardt, also a native of Germany. They had a daughter, Amalia, who became a well-known miniaturist artist. See: Hiram Williams Beckwith, History of Vigo and Parke Counties, Together with Historic Notes on the Wabash Valley . . . Chicago, (1880), pp. 298-9. It seems likely that Lorenz Kussner either taught Annie or employed her while at Terre Haute. Inventory available on request. (Inventory #: LV2308)
$800.00 add to cart Available from
Jeff Weber Rare Books
Share this item

Whims and Oddities, in Prose and Verse; with eighty-seven original designs. A new edition.

London: : Edward Moxon, 1860. , 1860
(click for more details about Whims and Oddities, in Prose and Verse; with eighty-seven original designs. A new edition.)