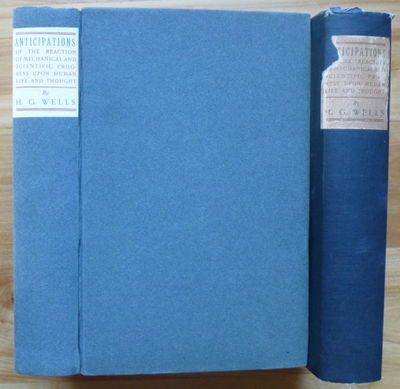 First American Edition of this book of prophecies for the Twentieth Century (such as locomotion, war, the diffusion of cities, and the conflict between languages). The book was an instant hit -- "Wells's first non-fiction bestseller" [D. Smith] -- and went through eight English printings within a year; MANKIND IN THE MAKING (1903) was its sequel. Many of his prophecies have proven to be accurate, and others (such as birth control for women) were quite controversial. According to Wells the socialist, his ideas were "designed to undermine and destroy the monarch, monogamy and respectability -- and the British Empire, all under the guise of a speculation about motor cars and electrical heating." This volume appears fine but does have a faint crack along the front joint (these are delicate paper-covered boards); the fabric dust jacket is very good, with minor wear at the extremities and with the "ANT" corner chipped off its spine label. Wells Soc. 19; Hammond E3. (Inventory #: 13938)
$175.00 add to cart or Buy Direct from
Sumner & Stillman
Share this item