Samuel F.B. Morse's Gallery of the Louvre and the Art of Invention 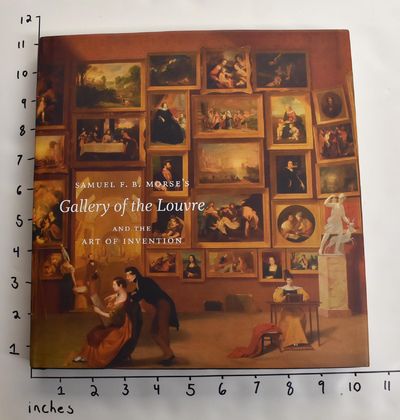 by Brownlee, Peter John (Editor)
New Haven, Connecticut: Yale University Press, 2014. Hardcover. NF/NF. Slate cloth/boards; copper lettering. Color-pictorial dj with white lettering. 223 pp. with several color illustrations. Insightful essays that offer a wide-ranging examination of a 19th-century American masterpiece: Samuel F. B. Morse's (1791-1872) Gallery of the Louvre (1831-33) is one of the most significant, and enigmatic,works of early 19th-century American art. It isalso one of the last works Morse painted before turninghis attention to the invention of the telegraph andMorse code. A signature painting in the collection of the Terra Foundation for American Art, Gallery of the Louvre underwent an extensive conservation treatment in 2010-11 and was the focus of three symposia held at the Yale University Art Gallery (April 2011), the National Gallery of Art (April 2012), and the Pennsylvania Academy of the Fine Arts (April 2013). This collection of essays, carefully drawn from the proceedings of these scholarly sessions, brings together the fresh insights of academics, curators, and conservators, who focus on the painting's visual components and its cultural contexts. The book accompanies a multi-year tour of the painting to prominent museums across the country. - from the publisher's web site. (Inventory #: 163411)
$35.00 add to cart or Buy Direct from Mullen Books
Share this item