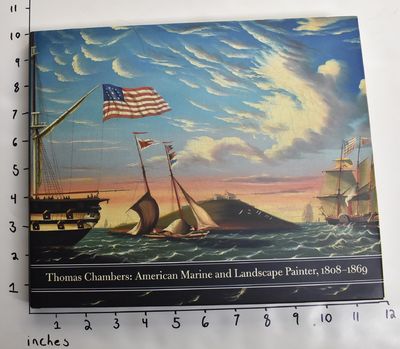 by Foster, Kathleen A.
Philadelphia, Penna: Philadelphia Museum of Art, 2008. Hardcover. VG/VG. Forest green cloth, gilt letters on spine, black & color illus. dust jacket, 171 pp.; 107 color illus., 9 BW illus. "Labeled as a traveling American folk artist when he was rediscovered in the mid-20th century, the mysterious Thomas Chambers here receives a fresh and creative reassessment. Although his distinctive sea and landscapes appear in many American collections, little is known about this English-born painter, who arrived in New Orleans in 1832 and disappeared from record in the mid-1860s, leaving many paintings that later resurfaced in rural New York and Massachusetts. In this richly illustrated work, Kathleen A. Foster shows, however, that far from being simply an itinerant painter of folk art, Chambers actually enjoyed a professional, even entrepreneurial, relationship to the art world." "Foster performs close studies of Chambers's known works, his stylistic relationship to his brother (English marine painter George Chambers), and a newly discovered American auction record of 1845. Chambers, she argues, provided a popular landscape art for a middle class of mixed cosmopolitan and folk tastes. Bringing "fancy" painting to this new constituency, Chambers worked outside academic circles, drawing astutely from popular culture. In the 20th century, his rediscovery as "America's first modern" paid tribute to his independent spirit and decorative panache."--Jacket. (Inventory #: 163397)
$24.99 add to cart or Buy Direct from Mullen Books
Share this item