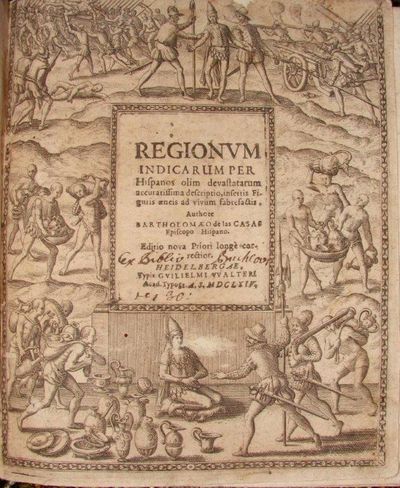 by BARTOLOME DE LAS CASAS (1484-1566).
Heidelbergae:: Typis Guilielmi Walteri, 1664., 1664. Translation of: Tyrannies et cruautez des Espagnols, itself a translation of: Brevissima relacion. The text is the same, with the exception of introductory matter, as the Frankfurt, 1598 edition with title: Narratio regionum Indicarum per Hispanos quosdam devastatarum verissima. Small 4to. [4], 112 pp. [Complete]. Engraved title-page within broad historiated engraved border depicting scenes of the Spanish conquest, 17 copperplates originally issued by De Bry, engraved by "Iodo. a Winghe" = Jodocus van Winghe (1544-1603), graphically depicting horrors and cruelties; first three leaves, including title, with careful neat paper repairs, title upper margin trimmed with loss of border. Modern half vellum, German paste-paper, title label on upper cover. Ink notation on title: "Ex Biblio Barcheous[?]. . . 30"; early ownership inscription,". . . Archiqnerbgter Buenovicente [Antiguedades . . . Bueno Vicente??]" Very good copy. RARE. First Heidelberg printing of this famous and controversial graphic depiction, description and recording of the horrors made by the native Central Americans subjugated by the Spanish conquerors in the 16th century. Parts of the text refer to Mexico, Guatemala, Yucatan, Cuba, Nicaragua, Hispaniola (today Haiti and the Dominican Republic), Jaragua [Xaraqua], Jamaica. The extraordinary illustrations depict scenes of mistreatment, torture and atrocities that were actually done to native Americans under the representatives of Prince Philip II of Spain. The Spanish Dominican friar Bartolome de las Casas was an eyewitness to some of this and made this record. The original text dates from 1552. In the text the author tells that some 15 million indigenous peoples of the Americas were murdered. This work was part of a larger group of anti-Spanish literature called The Black Legend, that demonized the actions of Spain during this period. / The publishing history of this book is detailed by MacNutt, who tells that the Brevissima Relacion was translated into French, Latin and Italian. The French edition of 1579 contains these same 17 engraved plates, also issued in Amsterdam in 1620; Paris in 1635, Lyons in 1642, and two more French issues in 1697 and 1701. The Italian editions were printed in 1626, 1630, and 1643. A Latin editions, [title vary] were printed in 1582, 1597 and the present issue of 1664. An English edition is recorded in 1583. The famous plates printed by Theodori de Bry, & Ioannis Saurii, were issued in Frankfurt. The present issue contains impressions of all 17 of the remarkable plates printed by De Bry in 1598. / "Despite the fact that Las Casas was the first and most vehement in denouncing the Spanish conquerors as bad patriots and worse Christians, whose acts outraged religion and disgraced Spain, his evidence against his countrymen was diligently spread by all enemies of his country, especially in England and the Netherlands, while Protestant controversialists quoted him against popery, and discovered in the conduct of the conqueors the evidences of Catholic depravity." - McNutt, p. xxvii. Las Casas' account was largely responsible for the passage of the new Spanish colonial laws known as the New Laws of 1542, which abolished native slavery for the first time in European colonial history and led to the Valladolid debate. PROVENANCE: Inscribed with the phrases, "Ex Biblio Barcheous[?]. . . 30"; early ownership inscription, ". . . Archimandrite Buenovicente" [Bueno Vicente?]". Archimandrite Bueno Vicente, an unverified name, would by title make this volume owned by the head of a monastery of the Spanish Orthodox Church. REFERENCES: John Carter Brown, III, p.109; Sabin 11285; Cf. Landis, Dennis Channing. Literature of the Encounter : A Selection of Books from European Americana, John Carter Brown Library, 1991. See: Johnson, Julie Greer. Book in the Americas; The Role of Books and Printing in the Development of Culture and Society in Colonial Latin America. Providence: John Carter Brown Library, 1988; Francis Augustus MacNutt, Bartholomew de Las Casas: His Life, His Apostolate, and His Writings, NY, 1909. See also: John F. Moffitt, Santiago Sebastian, O Brave New People: The European Invention of the American Indian, University of New Mexico Press, 1998. (pp. 303, 306). Wagner, Henry Raup & Parish, Helen Rand. The Life and Writings of Bartolome de Las Casas. University of New Mexico Press, 1967. (Inventory #: LV2313)
$6,950.00 add to cart Available from
Jeff Weber Rare Books
Share this item