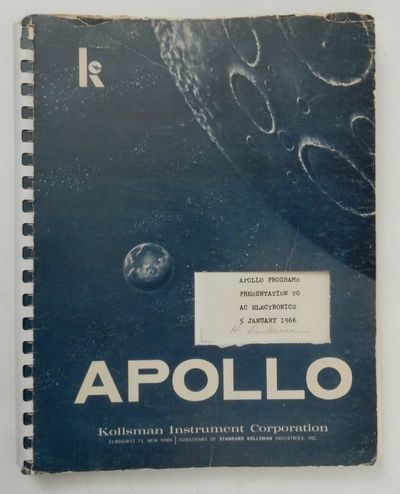 By Feb of 1964, the management structure was changed. "AC Spark Plug would become the principal contractor, with the Raytheon Company and Kollsman Instrument Corporation as subcontractors. MIT would still have primary responsibility for system design and analysis."

On October 14, 1964, the first Apollo "guidance system completed acceptance testing and was shipped at 11:30 p.m. and arrived at Downey, California, early the following day. AC reported that in more than 2,000 hours of operation they had found the system to be "remarkably reliable, accurate and simple to operate."

(the above timeline derived from the GM Heritage Center)

The document offered here, dated June 1965, is part of the next phase (which extended through 1969) which was expected to cover manufacturing and testing of the real Apollo guidance systems. The document (from Kollsman Instrument Corporation to AC Electronics*) is a detailed 3 month progress report. On display is the amount of intense cross-company planning and coordination necessary for major contractors to work together. Delivery schedules (everything from test fixtures to Optics Cleaner Kits, LEM trainer simulators, MSC Lunar Trainer, LEM GSE cleaner kits). An Apollo Optical Subsystem program summary with work delivery schedules (both high level and subsystems), major engineering investigations, etc. A major section covers Design Evaluation with similar detail. Then Production Status, starting with an airborne critical shortage list. Everything necessary for AC Electronics to measure the progress of one of it's major subcontractors. *[AC Spark Plug became AC Electronics earlier in 1965]

A tour de force of major manufacturing/design planning, ripe with internal planning and progress information not often found "in the wild" for projects of this importance. Ever want to study how space program work actually proceeded? How many moving parts there were? Perhaps the coolest aspect - only a few items delivered by this time have serial numbers over 8. Cradle period innovation on display. No one had ever done this before. Highly recommended for anyone interested in major project planning in the space program.

Genuinely rare. We find no copies of this (or any other Kollsman / AC Electronics presentation) in OCLC as of this writing, nor have we handled such in 20 years in the business. (Inventory #: 26705)
$825.00 add to cart or Buy Direct from Kuenzig Books
Share this item