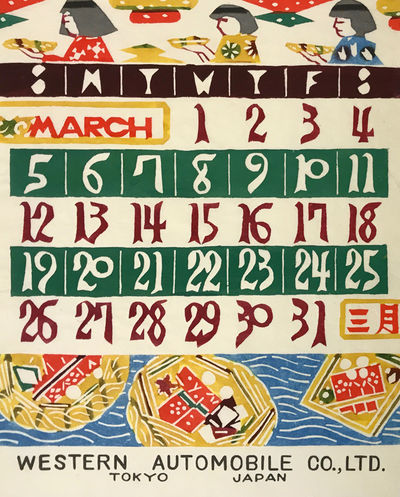 by Serizawa, Keisuke
Tokyo: (Takum Craft Shop), 1972. Stunning calendar featuring hand-dyed textiles by Keisuke Serizawa (1895-1984), a leader of the modern Japanese mingei, or folk arts, movement. Celebrating common objects like pottery, woodwork, and clothing as the "hand-crafted art of ordinary people," the artists of the mingei school used traditional craft techniques to produce inexpensive and accessible everyday goods. In many ways, the works of the mingei movement represent the successful execution of William Morris's Arts and Crafts ideals, which were never quite realized in his own expensive hand-crafted books, wallpaper, and decor. Serizawa specialized in the art of resist-dying textiles, reviving the centuries-old style of stencil dying called katazome, for which he was named a Living National Treasure by the Japanese government. This 1972 calendar, part of a series of katazome calendar folios begun in 1946, was produced as a gift for Mercedes-Benz of Japan. The calendar's patterns feature the Daruma, a popular stylized icon of the monk who founded Zen Buddhism; tengu, a mountain demon of folklore; and other traditional Japanese icons. A fine example of the twentieth-century Japanese folk arts movement by one of its leading voices. Portfolio measuring 15 x 11.5 inches, original stiff mulberry paper wrappers, two pastedown stencil-dyed mulberry paper labels to front wrapper, pastedown table of contents to rear wrapper, twelve loose broadside sheets (one for each month), each stencil-dyed in multiple colors on mulberry paper, untrimmed. (Inventory #: 1001892)
$400.00 add to cart or Buy Direct from Honey & Wax
Share this item