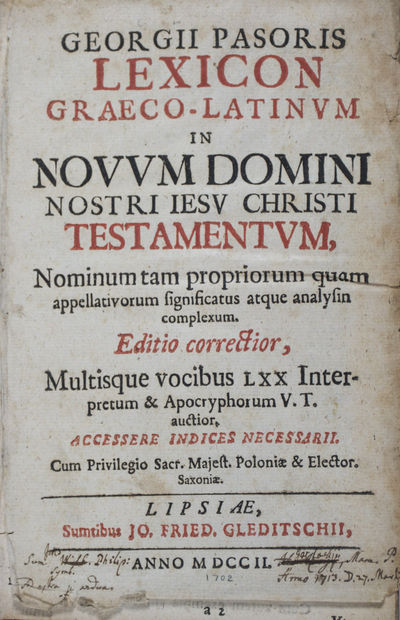 by Pasoris, Georgii (Georg Pasor)
Lipsiae (Leipzig): Jo. Fried. Gleditschi, 1702. Revised (Editio correctior). Hardcover. g- to vg. 12mo (7 1/4 x 5"). [28], 1752 columns (876pp), [400]pp. Contemporary full vellum with handwritten title to spine. Title page in red and black lettering. Decorative head-, tailpieces and initials. Originally published in Herborn in 1619, Georg Pasor's koine Greek* and Latin dictionary of the New Testament is, according to Adolf Deissmann in his "Light from the Ancient East" (1927), "the first lexicon to the New Testament." However, Deissman's claim has recently come under some criticism by John Lee, who shows (in his "History of New Testament Lexicography" (2003) that Pasor's work relies heavily on the work of his predecessors (especially Stephanus). Pasor does, however, seem to be the first NT lexicographer to divide his entries into senses, and his work dominated the field of NT lexicography throughout the 17th century. (For more information, see: J. William Johnston's "The Use of PAS in the New Testament" (2004)). Binding age-toned, partly darkened and soiled. Ex-library bookplate on inside of front cover. Title page detached but present. Contemporary previous owner's inscription dated 1713 at lower margin of title page (not affecting lettering). Minor and sporadic foxing throughout. Text in Latin and Greek. Binding in overall good-, interior in good to very good condition. About the author: Georg Pasor (1570-1637) was a philologist and private teacher, who later became professor of Greek and Hebrew at the university of Herborn, and in 1626, professor of Greek at the university of Franeker. * Before Alexander the Great, the Greek language was an assortment of localized dialects. Alexander wanted a Greek language common to all peoples. It was called 'koine' or common. By the time the New Testament was written (mid to late 1st century A.D.) koine Greek had become the common language in Israel. Koine Greek became more popular in Rome than Latin. One reason was Rome's acceptance of all cult religions as long as the Emperor was worshipped as well. One of the titles of the Emperor was the koine word, "kurios," which means "Lord." It was a divine title of the emperor! It was the main word used by the LXX (Septuagint) translators of the Old Testament when they translated the Hebrew word YHVH. (Inventory #: 43224)
$500.00 add to cart or Buy Direct from
Eric Chaim Kline Bookseller
Share this item