Nile to Aleppo: With the Light-Horse in the Middle-East 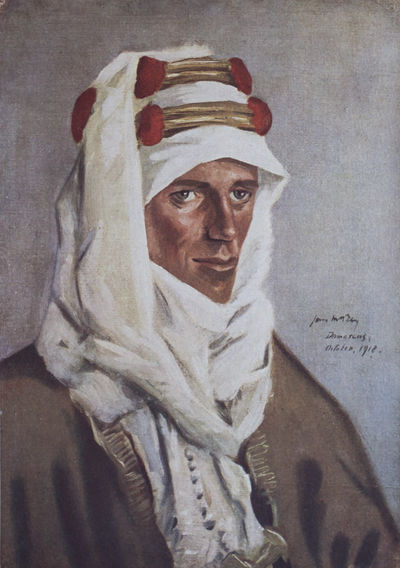 by Dinning, Hector; James McBey (ill.)
London: George Allen & Unwin LTD, 1920. First edition. Hardcover. g+ to vg. Quarto. 287 (1)pp., 13 plates, incl. frontispiece. Original orange cloth with blind-stamped ruling and gilt lettering on cover, gilt lettering on spine. Publisher's device on half-title. Color frontispiece. Personal account of Australia's Light Horsemen and their involvement in the Sinai and Palestine Campaign 1917 during W.W.I I. "Ullo, you blokes! Bin 'avin' a good picnic out 'ere?" "Aw, not too bad! jest bin moppin' up the --s that cleared you orf the Penninshuler!" "This rejoinder connotes the Light-Horse attitude of Mind (of the Light Horsemen). Only thus indirectly and facetiously can they be got to own the importance of their work... They are in many ways an unsophisticated people. They have no readiness to seize on the spectacular aspect of the campaign...They have no historical sensitiveness to the traditions of their battle-grounds. It was nothing to them that Napoleon had traversed Sinai and fought where they fought..." (Author). Illustrated beautifully with twelve reproductions of watercolors, tipped onto gray paper, and etchings of James McBey, a largely self-taught artist and etcher whose prints were highly valued in the early 20th century. During W.W.I. McBey accompanied the Allied advance in Palestine. Contains chapter on and painted portrait of T.E. Lawrence. Binding with light wear along edges, light bumps at corners and spine. Names of previous owners on front free endpaper. Some foxing on endpapers and first few pages and edges of block. Dealer sticker on inside back cover. Binding in overall good+, interior in very good condition. (Inventory #: 43213)
$125.00 add to cart or Buy Direct from
Eric Chaim Kline Bookseller
Share this item