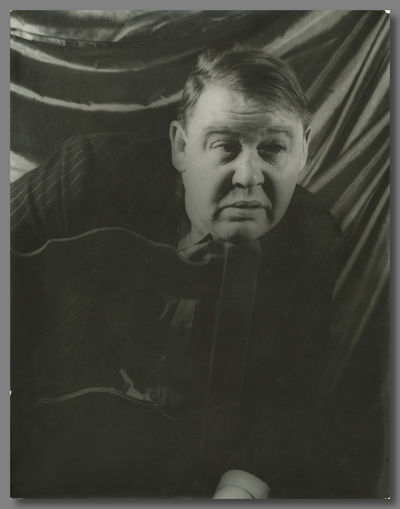 by [Laughton, Charles]: Van Vechten, Carl
[New York], 1940. Original borderless gelatin silver print, 35 x 27 cm (11 x 14"). Formerly matted, it would appear, with residue of mat tape on verso at tips and one edge, otherwise about fine. A striking and characteristic portrait by Van Vechten of the British actor, director and dramatist, seated backward in a chair, looking off camera, slightly to his left. With Van Vechten's studio stamp on the verso, and with his manuscript subject identification, negative number and date in ink (April 4.1940, negative number IV.R.32). Three images from the same sitting are in the Library of Congress Van Vechten photo archive catalogue, but not this particular image. Five images from this sitting are in the Van Vechten photo archive catalogue at Yale, but not this particular image. KELLNER G737. (Inventory #: WRCLIT78437)
$1,500.00 add to cart or Buy Direct from
William Reese Co. - Literature
Share this item