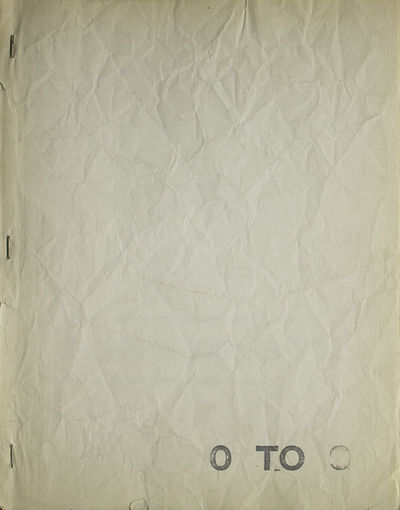 by Mayer, Bernadette & Vito Hannibal Acconci, editors
New York: [s.n.], 1969. First edition. [ii], 96 pp. mimeograph. 4to. Publisher's side-stapled paper wrappers, front wrapper intentionally crinkled and stamped ink ink with title. Small closed tears and chips to covers, internally near fine. First edition. [ii], 96 pp. mimeograph. 4to. The penultimate issue of "one of the most experimental of all the early mimeo magazines" (Clay & Phillips, A Secret Location on the Lower East Side, p. 207). This issue includes writings by Bernadette Mayer, Vito Acconci, Sol LeWitt, Jerome Rothenberg, Clark Coolidge and Adrian Piper, as well as "Fire Cracker," the first major time-based work of Rosemary Mayer (1943-2014), documenting the sounds of fireworks in Little Italy on the night of July 4 1968 between 9:19 pm and 1:29 am. In 2006 Ugly Duckling Presse published a reprint of the complete run of the magazine. Original issues are uncommon. (Inventory #: 309410)
$1,500.00 add to cart or Buy Direct from
James Cummins Bookseller
Share this item
James Cummins Bookseller Inc.
Offered by

Secret Despatches from Arabia by T. E. Lawrence. Published by Permission of the Foreign Office. Foreword by A. W. Lawrence

London : Golden Cockerel Press , 1939
(click for more details about Secret Despatches from Arabia by T. E. Lawrence. Published by Permission of the Foreign Office. Foreword by A. W. Lawrence)

The Art of Angling, Rock and Sea Fishing: with the Natural History of River, Pond & Sea Fish

London : Printed by and for John Watts at the Printing-Office in Wild-Court, near Lincoln's-Inn Fields , 1740
(click for more details about The Art of Angling, Rock and Sea Fishing: with the Natural History of River, Pond & Sea Fish)
View all from this seller>