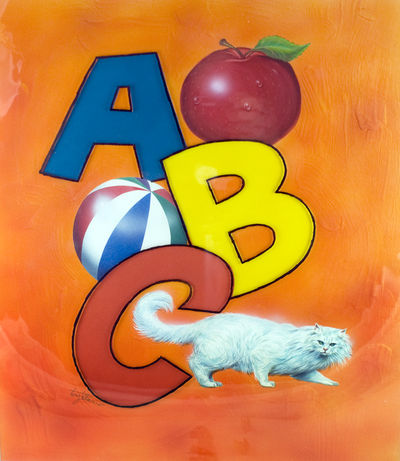 Tallarico, Tony. Original artwork, signed by the artist, Tony Tallarico. Depicting the letters A, B, and C against an orange background, this vibrant piece juxtaposes the realistic style of the letter examples (an apple, a ball, and a cat) with the playful style of the letters themselves, which have been enhanced by black outlines painted onto the inside of the frame glass. The letters evoke the typography of comic books; this is no accident since Tallarico spent much of his career as a comic book artist. He is particularly known for being the artist behind "The Great Society" comic book, published by Parallax, which satirized the administration of Lyndon Baines Johnson, and the short-lived series "Lobo" of Dell Comics, the first comic with an African-American to headline his or her own series. Tallarico later went on to illustrate hundreds of children's books, including the Where Are They? series. Fine in a gilt frame. (Frame measures 25 1/2 by 23 in.; 648x584mm). (Inventory #: 27687)
$1,250.00 add to cart or Buy Direct from
Bromer Booksellers
Share this item

The Pleasures of Planting and Other Thoughts

Detroit : Cranbrook Press , 1902
(click for more details about The Pleasures of Planting and Other Thoughts)

Elegy Written in a Country Churchyard

Salem, NY : Tortoise Press , 1903
(click for more details about Elegy Written in a Country Churchyard)
View all from this seller>