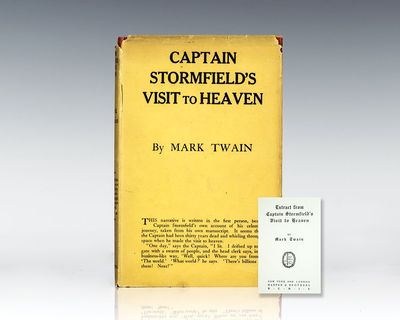 by Twain, Mark [Samuel L. Clemens]
New York: Harper & Brothers, 1909. First edition of the last work published by Twain during his lifetime. Octavo, original cloth, frontispiece, tissue guard. Fine in a near fine dust jacket with a few small chips to the extremities. Uncommon in the original dust jacket. Although not published until 1907 in Harper's Magazine, followed by a slim book version with some revisions in 1909, the story was quite old. The original manuscript dated back perhaps as far as 1868, and an 1873 version has survived. The story was revised several times, and chapters 3 and 4 of the manuscript became the Harper's story. Longer versions of the manuscript have subsequently been published, including one edited by Dixon Wector which appeared as part of Report from Paradise (1952), and in part 1 of Mark Twain's Quarrel with Heaven: "Captain Stormfield's Visit to Heaven" And Other Sketches" (Ray B. Browne, ed., 1970). Twain claimed that the story in its early version was a satire of Elizabeth Stuart Phelps Ward's The Gates Ajar, a very popular novel published in 1868. (Inventory #: 62044)
$1,500.00 add to cart or Buy Direct from
Raptis Rare Books
Share this item

Boston : Little, Brown and Company , 1946
(click for more details about Brideshead Revisited.)
View all from this seller>