JOURNAL OF THE CONVENTION OF THE STATE OF TENNESSEE, CONVENED FOR THE PURPOSE OF REVISING AND AMENDING THE CONSTITUTION THEREOF. HELD IN NASHVILLE 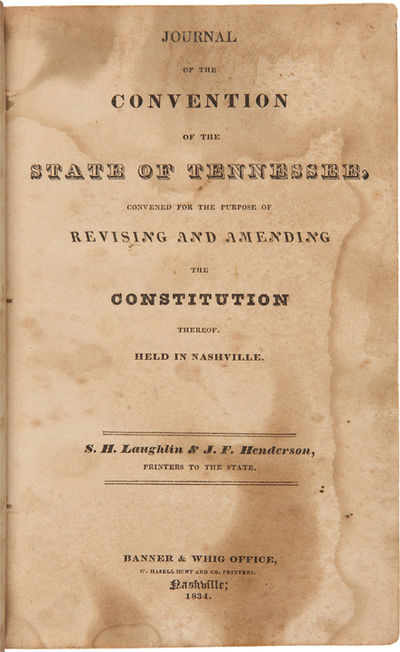 by [Tennessee]
Nashville, 1834. 415pp. Original three-quarter calf and marbled boards, gilt leather label. Hinges cracked, nearly detached, boards scuffed, edges and spine extremities worn. Early 20th-century ownership inscription on front free endpaper. Some foxing and tanning. Good, in original condition. Journal of the convention for the second Tennessee constitution. The principal alterations that arose from the convention were the establishment of a state supreme court and the enshrinement of suffrage only for white males. The separate printing of the 1834 constitution, the text of which appears here, is a notorious rarity, and this volume is quite scarce in and of itself. ALLEN 1136. ALLEN MORE RARITIES 404. AII (TENNESSEE) 550. (Inventory #: WRCAM53631)
$1,250.00 add to cart or Buy Direct from
William Reese Co. - Americana
Share this item