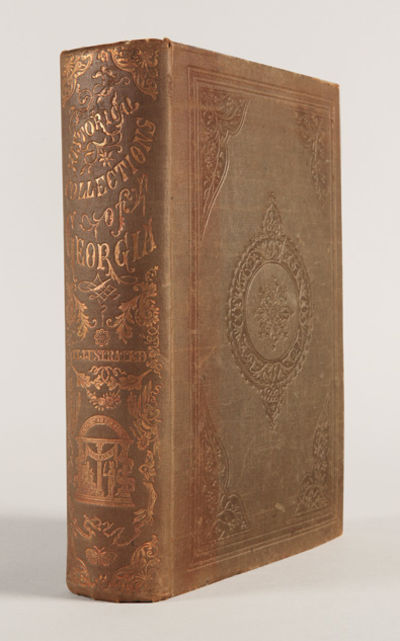 by White, George, Rev.
New York, 1855. 4,xvi,688,41pp. plus folding colored map frontispiece, twenty-two plates, and numerous in-text illustrations. Original blindstamped brown cloth, spine richly gilt. Corners slightly edgeworn. A few plates darkened, else bright, clean, and very good. A standard Georgia history, here in the third edition. The second and third editions were enlarged by the addition of statistical tables at the conclusion, the folding frontispiece map, and four pages of endorsements at the beginning. "[White's] accumulation of obscure traditions is elsewhere unmatched, and, whether factual or romanticized, provides insight into the early days of rural Georgia" - Willingham. The large colorful folding map of the state, on tissue, is by Bonner, and was engraved by Sherman & Smith in New York. WILLINGHAM GEORGIANA 40. DE RENNE II:576-77. HOWES W353, "aa." (Inventory #: WRCAM53666)
$900.00 add to cart or Buy Direct from
William Reese Co. - Americana
Share this item