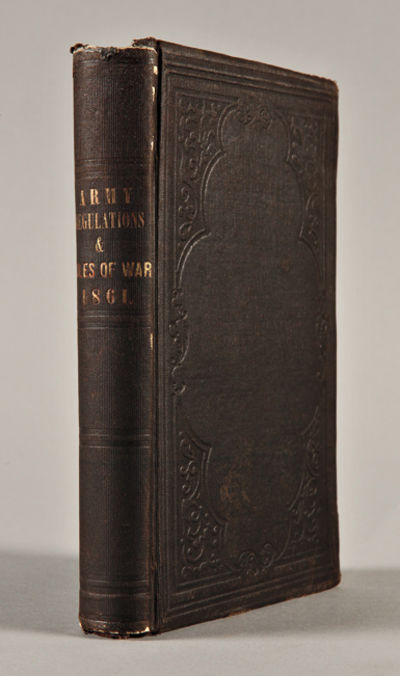 by [Tennessee
Nashvill: J.O. Griffith & Co, 1861. xxiii,457,21,12pp. plus two inserted plates printed on each side of one sheet. Publisher's embossed brown cloth, spine gilt. Spine ends a bit chipped, extremities worn. Contemporary ink ownership signature from a member of the Tennessee Ordnance Department, 20th-century Confederate bookplate, text mostly clean. Very good. A scarce early Confederate imprint relating to regulations for the Tennessee state army, organized by Gov. Isham Harris in the spring and early summer of 1861. It was a short- lived title for the state army; as soon as Tennessee seceded in late summer, the state forces were turned over to the command of the Confederate government. The rules, regulations, proceedings, and forms contained in the work are, of course, based on similar, corresponding examples in regulation books published by the United States military. The plate illustrates the organization of a camp of a regiment of infantry on the recto, and the same for five squadrons of cavalry on the verso. The last section, an addenda prints the "Act to Raise, Organize and Equip a Provisional Force, and for other purposes" passed in the Tennessee state legislature on May 6, 1861. Tennessee was gearing up for the Great Civil War.

This copy belonged to Col. George Henderson Monsarrat, head of the Ordnance Department of Tennessee in 1861, evidenced by his signature on the front pastedown. Colonel Monsarrat was a prominent Memphis citizen and businessman. According to the PUBLIC LEDGER, Monsarrat was "a citizen of Memphis fifteen years, and was always a leading spirit in public enterprises and every measure that promoted the general weal of the community."

From his obituary in the Memphis DAILY APPEAL, Dec. 12, 1869: "When the war begun Col. Monsarrat was appointed by Gov. Harris Chief of the Ordinance Bureau of Tennessee. He held this position several months, abandoning it to take command of a battery organized in Nashville. For some months he was Post Commandant at Knoxville, while George Crittenden, Leadbetter and Kirby Smith, at different times, commanded the Department. Gov. Brownlow was incarcerated by Leadbetter, and in the charge of Monsarrat, when he surrendered himself on condition that he should be sent North in safety... Col. Monsarrat's personal kindnesses to Brownlow began a friendship surely honorable to our Senator and illustrative of Monsarrat's generosity. At the close of Monsarrat's term of enlistment he abandoned the service, was married and lived during two years of the war in Montgomery, Ala. He returned, after peace, to Memphis, and, as the times permitted, prosecuted his business as a real estate broker."