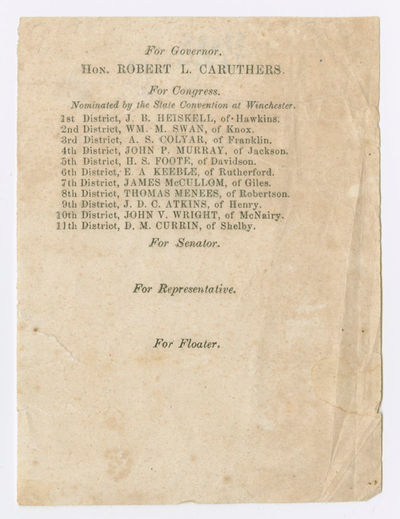 by [Tennessee]: [Confederacy]: [Election Ticket]
[Winchester, 1863. Broadside, 5 x 3 3/4 inches. Toned, minor soiling and wrinkling. Very good. An exceedingly rare Confederate Tennessee state election ticket from 1863, nominating Robert L. Caruthers for governor and eleven others as state senators. In 1863, state elections were due in Tennessee. The state was fractured by war and secession, and both Unionists and Confederates expressed the desire to hold elections for state government. Confederate supporters held a convention in Winchester and nominated a governor, the State Legislature, and members for the Confederate Congress. It was a bit of a fool's errand. Isham G. Harris, who still considered himself the Governor of Tennessee, issued a proclamation calling for the election to be held on the first Thursday in August. Just who voted, and how many or how few, will probably never be known. According to historians, the State Archives in Nashville are scant and inconclusive; returns from only thirty-two counties are found, some of which reported the vote of only one civil district. Not a single report was from West Tennessee counties, and only eight Middle Tennessee counties made returns. Robert L. Caruthers was elected governor on the face of returns, but he was never inaugurated and thus never served a day as governor of Tennessee. No Confederate State Legislature ever convened, either. The Confederate Congressmen were the only lucky ones. Those who were elected in 1863 took their seats in Richmond, however briefly. George Webb notes this copy in his NOT IN ALLEN bibliography in 2013. Not in Parrish & Willingham. The only other copy, or shall we say copies, resides at the Library of Virginia, in an uncut sheet of six tickets. This will likely be the only copy ever available in the marketplace. WEBB, NOT IN ALLEN 199 (this copy). OCLC 31767987. (Inventory #: WRCAM53688)
$850.00 add to cart or Buy Direct from
William Reese Co. - Americana
Share this item