MESSAGE AND INAUGURAL ADDRESS OF GOV. WM. G. BROWNLOW, TO THE SENATE & HOUSE OF REPRESENTATIVES OF TENNESSEE. SESSION OF 1865 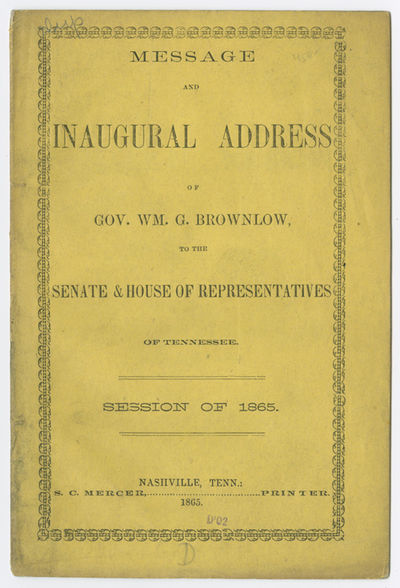 by Brownlow, William G.
Nashville, 1865. 23pp. Original printed wrappers. Some dust soiling to wraps, else very good. William G. Brownlow, who worked in his early life as a Methodist minister, was one of the most important and controversial southern anti-secessionists. Previously the editor of the TENNESSEE WHIG and later the KNOXVILLE WHIG (the last pro-Union newspaper operating in the Confederacy), Brownlow was a loud voice against secession, believing that the Confederacy would establish nothing more than a southern planter-class aristocracy. At the outset of the Civil War, he refused allegiance to the Confederacy, and fled to the mountains on the border with North Carolina in November 1861. Towards the end of the war, Tennessee Unionists decided to hold an election for governor, and put forth Brownlow as their only nominee. Brownlow's election as the first Reconstruction-era governor of Tennessee resulted both in the state being the first to leave the Confederacy, and the first to be formally readmitted to the Union in 1866. This work prints his inaugural address and his message to the Tennessee state legislature after his election, delivered on April 6, 1865, the same week at Lee's surrender at Appomatax. ALLEN 6135. (Inventory #: WRCAM53715)
$450.00 add to cart or Buy Direct from
William Reese Co. - Americana
Share this item