COLLECTIONS OF THE VIRGINIA HISTORICAL & PHILOSOPHICAL SOCIETY, TO WHICH IS PREFIXED AN ADDRESS, SPOKEN BEFORE THE SOCIETY AT AN ADJOURNED ANNIVERSARY MEETING, HELD IN THE HALL OF THE HOUSE OF DELEGATES, ON MONDAY, FEB. 4th, 1833 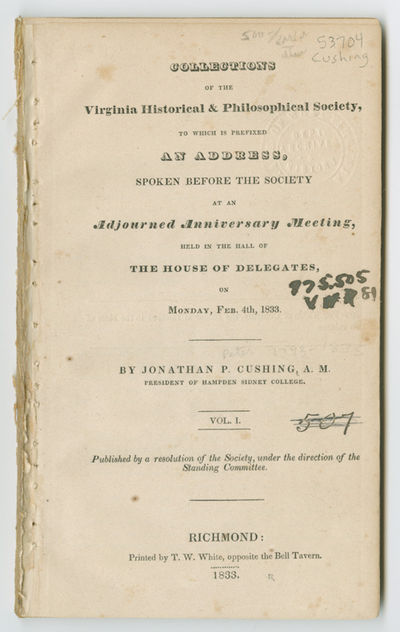 by Cushing, Jonathan P.
Richmond, 1833. 86pp. Dbd. Small embossed blindstamp and ink notations on titlepage. Very good. An early publication relating to the newly-formed Virginia Historical & Philosophical Society. Includes a lengthy address by the society president, Jonathan P. Cushing, on the importance of institutionalizing Virginia's historical artifacts, as well as a paper by Cushing entitled, "Record of Grace Sherwood's Trial for Witchcraft, in 1705, in Princess Anne County, Virginia." Also prints Charles A. Stuart's "Memoir of Indian Wars, and Other Occurrences; by the late Colonel Stuart, of Greenbrier" (pp.35-68). According to Field, this "is the only form in which Col. John Stuart's narrative of the Battle of Point Pleasant ever appeared in print." The work concludes with a list of donations and a membership roster. While a healthy number of copies can be found in institutions, the work is rare in the marketplace. FIELD 1609. SABIN 100556. SWEM 6017. (Inventory #: WRCAM53704)
$500.00 add to cart or Buy Direct from
William Reese Co. - Americana
Share this item