A BRIEF ACCOUNT OF THE AUTHOR'S INTERVIEW WITH HIS COUNTRYMEN, AND OF THE PARTS OF THE EMERALD ISLE WHENCE THEY EMIGRATED, TOGETHER WITH A DIRECT REFERENCE TO THEIR PRESENT LOCATION IN THE LAND OF THEIR ADOPTION, DURING HIS TRAVELS THROUGH VARIOUS STATES OF THE UNION IN 1854 AND 1855 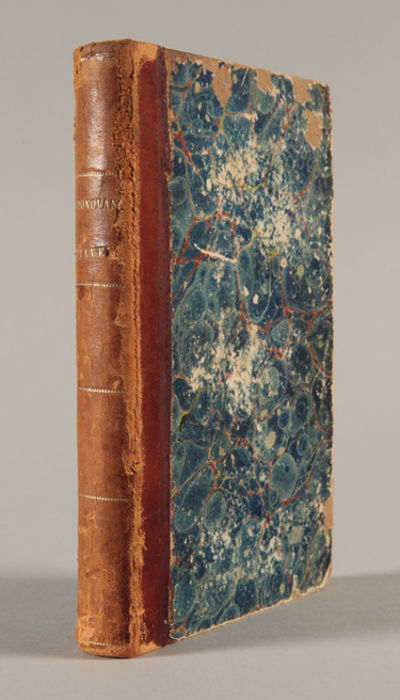 by O'Donovan, Jeremia
Pittsburgh, 1864. 382pp. Original half calf and marbled boards, spine gilt. Front hinge cracked, spine leather chipped, boards worn. Contemporary ownership inscriptions in front free endpapers. Light tanning and an occasional fox mark. Good. O'Donovan travelled extensively in the United States in 1854 and 1855, using Pittsburgh as a home base. He went west to St. Louis in the first section of journey, including a stop in Nauvoo, and afterwards spent the majority of his time in Philadelphia, elsewhere in Pennsylvania, New York, and Washington, D.C. Donovan's interests are almost exclusively focused on the relation of his encounters with various fellow Irishmen and Irishwomen during his travels, and his work is an interesting document of the quickly growing Irish diaspora in the United States during the mid-1850s. HOWES O24, "aa." (Inventory #: WRCAM53719)
$1,000.00 add to cart or Buy Direct from
William Reese Co. - Americana
Share this item