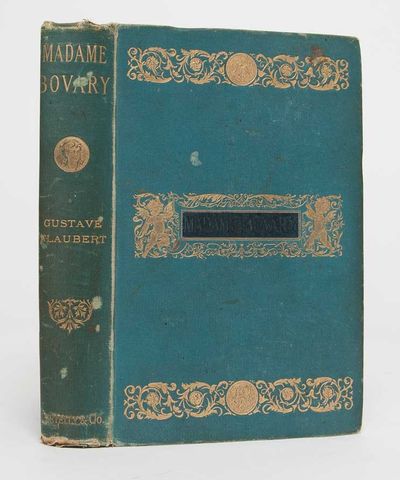 by Flaubert, Gustave
London: Vizetelly & Co, 1886. First English language edition. Very Good. Octavo: [2, publisher's ad], [i-vii], viii-xxii, 383; complete with the frontispiece and four illustrations. Original publisher's blue-green cloth binding with gilt lettering on the spine, gilt borders and center gilt cherub motif framing the title; publisher's blind stamp on rear cover. A Very Good copy that has not been worked on, with wear at the spine ends, some loosening of the text block, and toning/foxing to some of the early and late pages. Otherwise a fairly clean, attractive copy internally (and priced competitively with the other copies in cloth).

Flaubert's Emma Bovary rapidly gained notoriety for seduction and suicide following the novel's release and surrounding obscenity lawsuit in 1857. It would take another thirty years before the English edition of Flaubert's masterwork was translated and brought to Britain by Eleanor Marx-Aveling, daughter of Karl Marx, who aimed to give the English "a chance of reading... and seeing for themselves whether there is even the slightest foundation for this charge of immorality" (xii). Today, the novel is considered a masterpiece. "Madame Bovary is first and foremost a major milestone in the development of modern and, eventually, modernist fiction, as it introduced or intensified such developments as authorial ‘impersonality', free indirect narration and a willingness to delve thematically into the banality and vulgarity of contemporary life" (Sayeau). Very Good. (Inventory #: 1908)
$1,950.00 add to cart or Buy Direct from
Whitmore Rare Books
Share this item

London : J. Johnson , 1796
(click for more details about Letters written during a short residence in Sweden, Norway, and Denmark)

London : John W. Parker and Son , 1858
(click for more details about Intellectual Education, and Its Influence on the Character and Happiness of Women)
View all from this seller>