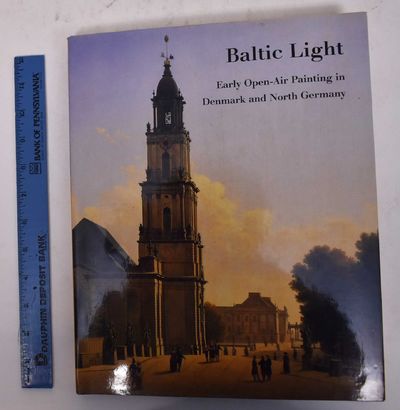 by Johnston, Catherine et al.
New Haven and Ottowa: Yale University Press : in association with National Gallery of Canada, 1999. Hardcover. VG/VG. Dark blue cloth covered boards with color pictorial, glossy dustjacket. 220 pp. Numerous color plates. During the first half of the nineteenth century, Danish and German artists studying in Paris and Rome brought back the concept of "plein air" painting and began to paint out-of-doors on their native soil. They introduced a whole new aesthetic that was sensitive to the light and atmospheric conditions peculiar to the north, especially during the long summer days. This beautiful book focuses on the painters and paintings of this period, particularly Caspar David Friedrich, who produced many fine works before he developed the romantic style for which he is better known. The book presents topographical landscapes, panoramas, and some group and individual portraits that often include a window from which light emanates. Essays by eminent authorities discuss various aspects of the Danish and North German open air movement. They note, for example, that the paintings reflect a direct view of nature devoid of the intellectual and moral overtones of the neoclassical paintings that preceded them. They also discuss the fact that Schleswig Holstein was closely allied with Denmark until 1848, and this favored many Hamburg and north German artists studying at the Academy in Copenhagen where painting out of doors was encouraged. In addition to the essays, the book presents 108 works by twenty-three artists, catalogue entries for each work, and a biography of each artist. Published to accompany an exhibition held in Ottawa, Canada: National Gallery of Ottawa, Oct. 15, 1999 to Jan. 2, 2000. (Inventory #: 163458)
$29.97 add to cart or Buy Direct from Mullen Books
Share this item