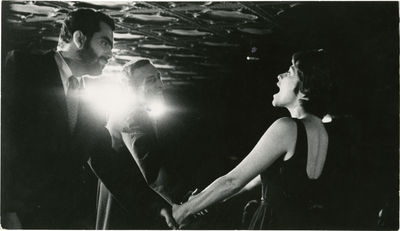 by [The Premise] James Frawley, Joan Darling, Theodore J. Flicker (members), Morton Shapiro (photographer)
N.p.: N.p., 1962. Three vintage oversize photographs from a circa 1962 performance from the pioneering improv group The Premise, one featuring founder and performer Theodore J. Flicker, one featuring original players James Frawley and Joan Darling, and one showing theatre entrance. Each with the stamp of "Horizon" magazine on the verso, along with holograph annotations crediting photographer Morton Shapiro, and noting one of the photograph's inclusion in the January 1962 issue.

Beginning with his work at Chicago's legendary Compass Players, Flicker, alongside the likes of Mike Nichols, Elaine May, and Del Close, helped create and codify the rules and structure of American improvisational comedy. In 1960, he founded The Premise Theatre troupe in New York's Greenwich Village, where they would perform improvised shows from 1960 to 1962, before eventually moving to the Comedy Theatre in London's West End.

In addition Frawley and Darling, who would go on to long careers as television directors, where Darling would become one of the first women to receive an Emmy nomination, The Premise help launch the careers of Gene Hackman and Buck Henry. Flicker and Henry would co-write the 1964 film, "The Troublemaker," based on their work at The Premise, and which Flicker would direct, and in which they both would appear alongside Frawley, Darling and other members of the troupe.